Thanks to advances in technology, action cameras are getting smaller, lighter, and more accessible. Capturing the world in high definition and sharing all of our biking adventures has never been easier. There is a huge variety of cameras with different characteristics and prices. That’s why we set out to thoroughly research and select cameras to help you make a well-informed decision.

Let’s start talking about the best sports cameras in 2020.

What do I want a sports camera for?

Sports cameras are super fun and among many other things, you can document your bike trips or share your trips on social networks. On the other hand, these cameras can also function as a tool to document and evidence incidents, road rage cases, and poorly made cycling infrastructure.

A study conducted in Australia, using video recorded by cyclists, revealed that motorists are responsible for 87% of road incidents. Some do not get scared, but many others end in accidents .

Without a doubt the best action camera you can buy, if you have the budget, is the GoPro HERO 8 Black. This camera is loaded with features that make it stand out from the rest. With HERO 8 you can capture your adventures in the highest quality.

Its HyperSmooth 2.0 stabilization system stands out, with which you will achieve clear images no matter how extreme your adventure is. The GoPro HERO 8, records 4K video at 60 fps, is waterproof up to 10 meters without the need for a case. It has an innovative folding mount integrated into the camera body, which makes it super versatile.

What makes it different from the HERO 7 versions (Black and Silver). First of all, the variety of digital lenses: SuperWide, Wide, Linear and Narrow. The HERO 8 Black has a horizontal level, through the App and it is now easier to add lights, a microphone and an additional display, thanks to the new Mods system.

Another new feature is the LiveBurts function that allows you to record the exact moment 1.5 seconds before and after you shoot a photo. How you see is loaded with news.

We could say that DJI are relatively new in the area of ​​sports cameras. However, this does not mean that they are newbies. DJI has dominated the world of aerial photography with drones for some years now. They have developed technology for image stabilization and perfected intuitive flight control.

All this knowledge is now being poured into the DJI Osmo Action. It has been designed to become a clear rival to the GoPro. One of its most outstanding features is its front screen, in addition to a 2.25 ”rear touch screen.

It has two microphones, voice activation, and many other features that make it a worthy contender. The Osmo Action is waterproof up to 11 meters without housing, it records 4K video up to 60 fps, which together with its stabilization system will give you the possibility to create amazing videos.

This camera can be an excellent alternative for those who want to update their HERO 6 or earlier equipment. Although you will not have all the news that with HERO 8, it is very possible that the characteristics of this camera are more than enough to capture all your videos with surprising quality.

The HERO 7 Black was the first GoPro to incorporate the HyperSmooth stabilization system, which together with the ability to record 4K video at 60fps will achieve the clearest and most detailed images in any situation. It has a TimeWarp system that will allow you to capture TimeLapse video without the need for a tripod since it has 2GB memory to stabilize frame by frame.

Another novelty in this camera is its voice control. As you can see, the GoPro HERO 7 Black may be a more accessible alternative to the HERO 8, but still one of the best action cameras today. Their collection of digital lenses includes: SuperView, Wide and Linear. Something that makes it different from HERO 7 Silver and even HERO 8 is the ability to capture photos in RAW.

The HERO 7 Silver is the cheapest GoPro among the latest models. This camera is still pretty good. It is capable of a beautiful 4K video up to 30fps, one of the differences from the HERO 7 and 8 Black. The stabilization system is not that sophisticated, but it can certainly be sufficient for most people who shoot simple videos.

Unlike its bigger sisters, HERO 7 Silver does not have digital lenses and the battery is not removable. For many, it can be an inconvenience, since you cannot carry extra batteries for long hours of recording.

Like other cameras in this selection, the SJ8 Pro is capable of recording 4k video at up to 60fps at a much more affordable price than the GoPro.

It has 6-axis image stabilization, allowing you to capture all the action through clear video with excellent quality. One of the features that make this camera special is its 8x digital zoom function.

The SJ8 Pro comes equipped with an external cause, which will allow you to submerge it up to 30 meters. In addition, this camera can be controlled remotely through its App for Android and iOS. 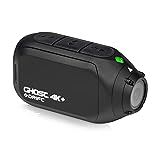 The aerodynamic design and a super-resistant body make it a very good alternative for cyclists. One of the strongest points of the Ghost 4K is the audio that you can record.

Equipped with a pair of microphones, front and rear, you will be able to counteract the typical sound of wind when recording video at high speed. This camera is not waterproof, which can be inconvenient for some people.

This camera records 4K video at 30 fps, however, its image stabilization system is optimized to record at 1080. When your adventures include excessive vibration it will be better to record in 1080. In short, with the Ghost, you will achieve the highest quality in videos in the ones that the camera won’t shake too much.

The Victure AC700 is a fairly inexpensive alternative. It certainly doesn’t have the same super specs of other cameras in this selection, but it may be enough for those who don’t require as much sophistication in their videos.

The Victure AC700 records 4K video at 30 fps and features EIS electronic image stabilization. The camera has Wi-Fi connectivity so it is easy to control through an App, available for Android or iOS. It has a housing that allows you to submerge the camera to a depth of up to 40 meters.

This camera comes with several accessories, including an external microphone, which allows you to record good quality sound when the camera is inside the housing. In addition, it has a remote control and an extra battery.