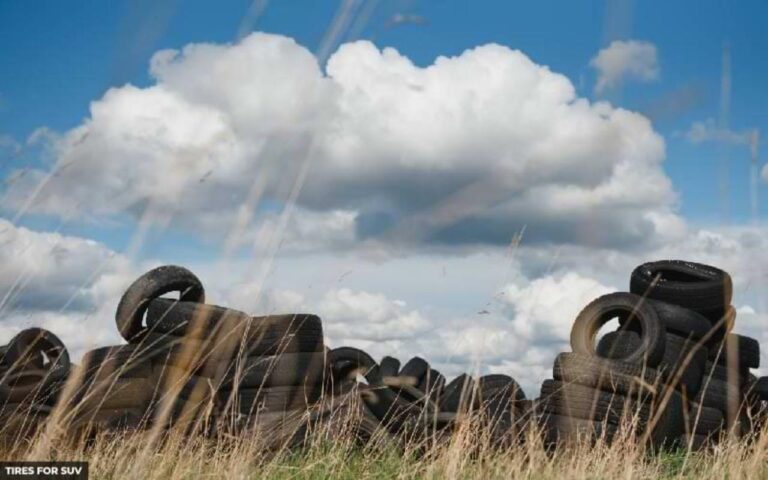 Did you know that many people still burn old vehicle tires? In addition to being illegal, this is one of the worst things you can do to get rid of tires. It releases enormous quantities of toxins into the air and the ground. They get into your lungs while you’re burning them.

Landfilling old tires aren’t much better since they never actually deteriorate in the landfill. They take up space and produce toxic leachate.

Fortunately, recycling car and truck tires are getting a lot more popular and are a viable option for people who want to do something more responsible with their tires.

Recycling numbers for those tires have gone from ten percent in the late 1980s to more than eighty percent today.

The materials in tires can be recycled in several ways, though it’s been challenging to find good uses for old tire material. Let’s take a look at some of the things done with old tires to recycle them.

Most of us have our tires changed by professionals. If you don’t, you should turn yours into a recycling facility. One in four tires taken to a recycling location, either by an auto shop or an individual, will be retreaded and used again.

Old tires that are too worn out for retreading may be ground, with the resulting rubber used to make rubberized highway asphalt.

This material is less subject to cracking in harsh winters since the rubber allows it to expand and contract with temperature changes. That means asphalt lasts longer when it’s made with old tires.

For many uses, old tire rubber is cheaper than collecting and processing new rubber for the same use. Plus, it gets rid of those old tires, which would otherwise pollute and take up space.

Shredded tires may be used to base gravel roads or replace sand and gravel in other road construction uses. They’re also part of the surfaces for many indoor sports fields, including tennis courts, and are used to create safe playing surfaces on playgrounds.

Cement manufacturing requires a lot of energy. As an alternative fuel to other primary options like coal, old tires can be used. They chop the tires into 5–10 mm chips, and in this form, they will get injected into a combustion chamber. Another ingredient of cement is iron, so the iron in steel-belted tires is another pro.

Can You Burn Old Tires?

Your tires won’t last as long as your car. They’ll wear out and need to be replaced periodically. If you change your own, getting rid of them in the past was pretty difficult. That’s why so many people used to burn tires or throw them away illegally.

In the old days, even companies that were willing to take tires from you usually burned them, too. The substances released by burning tires include heavy metals like arsenic, cadmium, lead, and mercury, plus dioxins and other unpleasant substances. It isn’t good for the environment and human health.

Thankfully, nobody’s burning tires anymore. Since more than a billion are sold each year, with more than two-thirds of them replacing worn tires, nearly that many are discarded, too.

There’s even an environmentally friendly way to burn tires that aren’t recyclable otherwise, but you can’t do it on your own. Pyrolysis is a process by which tires are burned in a vacuum or an environment with reduced air.

Many of the tire’s raw materials can be recovered, including petroleum products, carbon, combustible gas, and steel. However, this process is complex, can be expensive, and must be done by professionals.

There are so many different ways to recycle tires and get more use out of them that it’s silly not to do it. If you change your tires on your own, turn them in to be recycled.

If you have them changed professionally, find out what’s done with them afterward. Recycling tires is a smart choice.