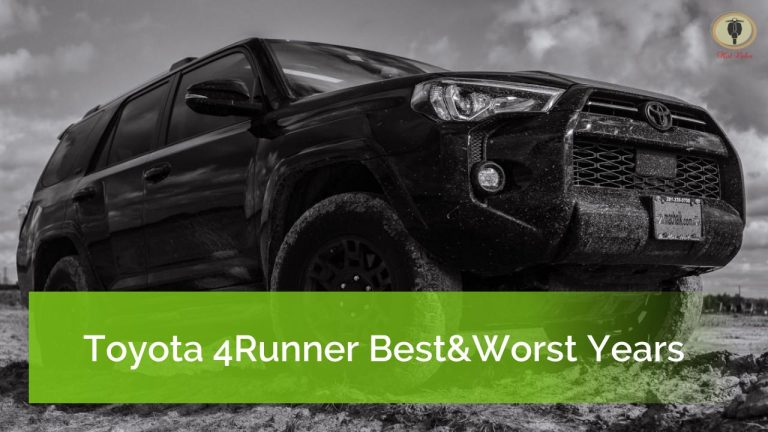 Toyota 4Runner is one of the most reputable vehicles when it comes to reliability and price. According to Consumer Reports, most of its model years have a reliability verdict of 4 out of 5 or more.

It is over three decades old and has proven to be a capable off-roader. Early models dating back a decade can be found cheap and come with excellent reliability and quality scores from J.D Power and the National Highway Traffic Safety Administration (NHTSA). 4Runners have had few recalls over the years, with most issues concentrated on 2010 and earlier models.

The fourth and fifth generations of the 4Runner are the most reliable. They not only brought comfortable features but also added a new and improved Toyota Star Safety System. However, despite the success of the 4Runner, several years have come with significant drawbacks.

Toyota 4Runner years to avoid when buying a used car include:

Below are the best years to look for when purchasing a used or new 4Runner:

Overview of the Toyota 4Runner lineup

4Runner lineup is spread across five generations. The first vehicle hit the showrooms in 1984. It borrowed a lot of features from the Toyota Pickup, with a few changes on the camper shell and rear seats pulled to the back.

First-generation (1984 – 1989): The main difference between the Pickup and the new 4Runner model was a retractor windshield that dropped to the tailgate. The first vehicles featured a 2.4L I-4 engine that produced up to 100 hp. Models from this generation had two doors only with fuel injection systems beginning in 1985. Common issues with these models were sagging rear suspensions.

Second generation (1990 -1995): The generation is one of the less reliable since the vehicles also suffered from the typical sagging rear suspension. Engines include the 2.4L and 2.8 I-4 and other 3.0 L engines. A full-steel integrated body mounted on the frame added to the vehicle’s build quality, and four doors made it more modern and practical. These vehicles were not the safest due to low standards for light trucks in the United States at the time.

Third generation (1996 – 2002): A new 2.7L I-4 engine capable of producing 150 hp was added to the lineup. This generation brought improvements like larger interiors, ABS options, rack, and pinion steering, improved aerodynamics, and better full coil-spring suspension. The 3rd generation is an okay space for the model, but the vehicles were primarily plagued by bumpers that crumpled too quickly.

Fourth generation (2003 – 2009): This was when the 4Runner started getting good. The engines became more powerful, producing up to 265 hp with the V8 engines. Upgrades included remote keyless entry, automatic climate control, telescoping steering wheel, and power rear tailgate window. In addition, the Star Safety System from Toyota added to its reliability and customer satisfaction.

Fifth-generation (2010 – Present): Toyota returned to the square design of the vehicle. They also added a 4.0 L V6 variant to the list with its dual Variable Valve Timing with intelligence (VVT-I). Performance was increased, and the vehicles became more fuel economical. Only a few models from 2014 to 2016 are worth looking into due to headlight failures, and the test fails in the driver-side small overlap test.

You should stay clear of the models below as they are the most complained about. These vehicles feature major issues that can cost you thousands of dollars to fix. The list is selected based on the number of complaints, recalls, and severity of reoccurring issues.

IIHS (Insurance Institute for Highway Safety) started testing the Toyota 4Runner during this period. Unfortunately, safety ratings were less than desirable, with various issues pointing to the body, paint, suspension, and drivetrain problems. It is interesting to note that rust caused most of these issues, usually above 100,000 miles.

The body and paint problems came from rust and corrosion easily occurring on the vehicles. Rust eventually led to weak structural integrity and eventual frame cracks in some SUVs. In addition, the rusting affected the suspension components, breaking down and making the vehicle unsafe to drive. In some models, rust eventually got to the drivetrain, causing the rear differential to wear out with time.

2001 and 2002 models also stand out as one of the years to avoid due to the lack of manual transmission or locked rear differential. This was changed from the 2000 model, thereby decreasing the vehicles’ beloved off-road capabilities.

According to Car Complaints, the 2003 model is ranked as the worst model year for the 4Runner. However, 2004 is the most complained year with 2003 and 2005 following close behind. These vehicles are widely known to have excessive rust issues that affect the vehicle’s structural integrity. Driving a vehicle with excessive rust is unsafe and very dangerous to everyone.

2003 and 2004 models received a recall regarding the accelerator pedal. As per the recall, the pedal would get stuck in random situations and cause the vehicle to accelerate at very high speeds. This made it hard for the vehicle to stop, thereby being a risk for crashes, serious injuries, and even death.

IIHS did not rate the head restraints and seat safety highly. This is because the crash test dummy was found to hit the head on the B-pillar, resulting in a concussion. Moreover, NHTSA has had over 100 complaints over the three years pointing to blown head gaskets.

Toyota rebuilt the engine the following year, acknowledging that the 2003 -2005 engine was not high quality. Typical solutions include replacing the head gasket and machining the cylinder heads. Unfortunately, these are expensive fixes that can cost more than $2,000.

The models also had a severe issue with the dashboard, which prematurely cracked on various vehicles. Dashboard cracks usually occur when the vehicle is exposed to extreme UV radiation and heat. Unfortunately, this means that the dashboard in these models is not well protected from extreme environments.

Fifth-generation vehicles are some of the most reliable 4Runner models, but the 2014 – 2016 models had a few concerning issues. One of the issues is with the 2015 airbags that did not deploy responsively. Airbags in these vehicles were inconsistent, increasing the risk of injury and death during crushes.

Another issue about these models is the door lock actuators which went bad prematurely. It is not a big problem as you can find a quick fix, but it is a cause for concern since the problem occurred earlier than expected.

These are the years you should budget for when thinking of buying a 4Runner:

2007 marked a great year for the vehicle since the excessive rust issues affecting previous models were dealt with. By 2009, there were only two complaints regarding body issues. These vehicles retail for about $11,000 to $16,000, making them a great buy considering the features they come with.

One of the upgrades is the standard torso and side curtain airbags introduced in 2008 to improve the vehicle’s safety. In addition, the introduction of Toyota’s Star Safety System improved the vehicle’s reliability and safety. Consumer Reports ranks these vehicles’ reliability above average, and the customer satisfaction was a 5 out of 5 for all three years.

You can only expect the best from the latest generation since it brought about the 4.0L V6 engine with its Dual VVT-I feature, which increased fuel economy and power output. They also feature a reliable five-speed automatic transmission.

NHTSA only records a little over 50 complaints in each of these years. The only common issue is the failed deployment of the airbags. The good news is that these models were recalled and can work fine once the issue is dealt with.

2017 model marked the beginning of the most reliable 4Runner vehicles on the market. 2017 model has a Consumer Reports reliability score of 4 out of 5. It retails for about $30,000 to $41,000, which is not a bad deal considering it comes with modern safety features and a design that isn’t classical.

These vehicles have a consumer rating of more than 80% from J.D Power. Owners like the comfort of the seats, the amount of space in the trunks, and smooth steering. You can save more than $8,000 by purchasing the 2017 – 2019 models since they have many similar features to the latest vehicles.

What to consider before buying a used Toyota 4Runner

First, pay attention to the number of 4Runner recalls when purchasing a used model. This can help you avoid years of multiple recalls, thereby saving on expensive repairs. It is also essential you go through the common issues with the particular model to have a general idea of the complications you may face.

Here are the few issues you need to keep in mind when getting the used model since they are recurring in most 4Runner models:

The third and fourth generations are the ones who are greatly affected by the rust issue. The material used in the construction was not high quality as vehicles would start to experience excess rust when past 100,000 miles. It is an expensive and dangerous issue that can require you to replace the entire frame. Car Complaints rates the issue “Really Awful” with a fatality rate of 10/10.

This is a problem that largely affected the 2015 model as compared to the rest. The good news is that vehicles received a recall for the problem, and your local mechanic shop can easily fix it. However, keep in mind that unresponsive airbag systems are hazardous and should never be left unrepaired.