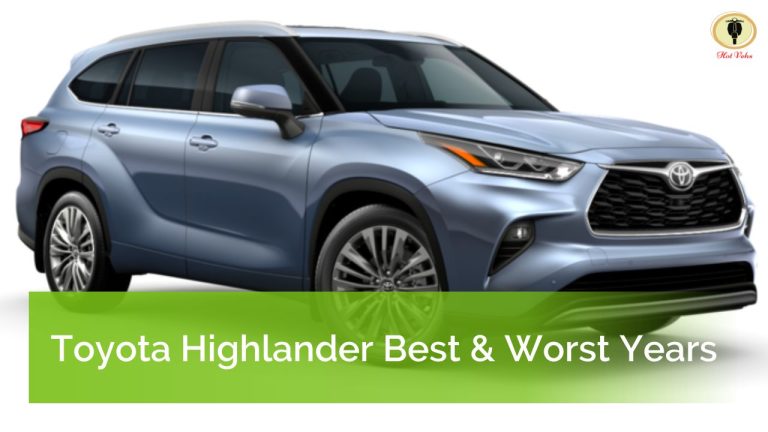 The Toyota Highlander has been in production for over two decades since it was unveiled in 2000 at the New York Auto Show. This mid-size SUV is one of the most reliable, safest, and most comfortable vehicles. The vehicle has received many awards, including Kelly Blue Book’s KBB.com Best Resale Value: Brand of 2021.

Despite its massive success and few severe complaints, the Highlander has had a few recalls. Some include airbag issues and software problems, but mainly fuel system failures and breakdowns. There are also various reports regarding hydraulic issues, electrical systems, and brakes.

The Toyota Highlander years to avoid when buying a used car include:

Below are the best years to look for when purchasing a used Highlander:

Toyota Highlander Generations and their years to avoid

Generation 2 (2008 to 2013): Very few major issues were reported in these years. 2008 is the model year you should avoid due to engine problems like vehicle speed control module failures. Luckily, more than half of the 2008 issues were dealt with in the 2009 and later second-generation models.

Generation 3 (2013 to 2019): Features six-speed transmissions, some options for AWD, FWD variants from each year, 2.7L I-4 engine, and 3.5L V6 variants. Towing capacity was significantly improved to a whopping maximum of 5000 pounds. 2015 model received the most complaints according to NHTSA and Car Complaints.

Generation 4 (2020 to present): This generation has the most reliable models, albeit at a higher price than the second and third generations. Vehicles in this category come with a GA-K platform responsible for improved drivability and handling. Most complaints are new and venture around the common Toyota issue of having tanks that do not fill up completely.

With that said, take a look at the various major and minor problems in the select years you should avoid:

2003 Highlander model has the worst complaints per various authorities, including the NHTSA and Car Complaints. The main problems revolve around engine issues that are severe enough to cause injury, affect drivability safety, and significantly reduce the vehicle’s lifespan.

There are over 100 NHTSA complaints regarding the 2003 engines. The two trims include a 2.4L I-4 engine capable of producing 155 hp and a 3.0L V6 engine that produces 220 hp. These engines had issues with cooling, and some threads of the engine bolts would strip. This could lead to overheating, coolant leaks, and eventual engine failure.

Most engine problems that occur above 100,000 miles can cost between $1900 and $5000 to fix. Typical solutions include replacing the engine, fixing the bolts, and bolt holes. The many engine issues did not have any recalls. There are only two 2003 Highlander recalls; one for the wheels and another for the lock on the side doors.

The wheel recall involves faulty wheel nuts that could eventually damage the spare wheel when it was installed. This led to a loose wheel that could lead to accidents. On the other hand, side door recall involved a malfunctioning CPL that could become deactivated without the driver’s notice. The door was then able to get opened even when the vehicle was in motion.

Despite its many issues, Consumer Reports rated the vehicle’s reliability at 4 out of 5, with 4/5 owner satisfaction. A few contributors to its above-average rating include the safety features like the anti-lock brakes, the front-impact airbags, and the pretensioners that automatically tighten to decrease injury during a collision.

Other issues with the 2003 model include window and windshield problems that affected the driver’s visibility. There were also a few reports on the unresponsive brake and hydraulic systems.

2008 Highlander has 14 NHTSA recalls, and the average price of $9,000 to $12,000 does not make it a good purchase. Car Complaints has recorded over 500 complaints: engine problems, airbag issues, steering problems, and brake failures.

Engine issues include engine rattle noises that occur during a cold startup. There are also reports of rubber oil line getting broken, engine failing to start, a few mentions of the timing chain cover that leaks oil, and several complaints regarding engine cooling. Keep in mind that this is a common problem when the vehicle is past 90,000 miles.

The 2008 Highlander received over 70 NHTSA complaints regarding the brakes. Most owners reported that the brake issues began when the brakes began to act unusual and produced grinding noises when the pedal became fully depressed. This would be followed by error messages on the display indicating: Brake Malfunction, Check ABS, Check VSC System, and Check Brake System.

Brake issues are fatal problems that can cost more than $1000. Moreover, it can become a recurring problem that has to be continuously fixed and lead to premature rotor wear.

2015 has the most reported issues on Car Complaints. Many owners reported that the front seats were so uncomfortable that they experienced backaches even when taking short trips. This third-generation vehicle retails at an average of $19500-$26150. But with the many complaints, it is fair to say it is not worth the buy.

The vehicle has three NHTSA recalls regarding electrical Systems, visibility, and steering. One of the electrical system issues involves damaged ECMs that can result in engine stalls and increased risk of road accidents.

Owners of the Highlander also complained about minor issues like wind noises when driving above 25 miles per hour. The funny part of this complaint is that the cause was eventually found to be the oversized side mirrors included in the model.

Below are the best years of the Highlander lineup:

The 2008 model was plagued with a lot of issues like the engine, steering, and brake problems. These issues were slashed significantly in the 2009 model, making it one of the least complained about Toyota Highlander.

2009 model is smooth and comfortable with enough space for the cargo and passengers. The two trims include the 2.7L I4 engine that produces 187 hp and the 3.5L V6 engine capable of producing 270 hp at 6,200 pm. Moreover, the fuel economy is quite impressive at a rating of 20/27 mpg.

It retails for about $10,300 to $12,800 and features an impressive reliability Consumer Reports rating of 5 out of 5. Needless to say, the 2009 Highlander is the best buy for someone looking for a reliable vehicle with excellent fuel economy and at a favorable price.

2017 to 2019 models are known to many as the best years for a used Toyota Highlander. This is because they provide the best modern features of the Toyota model at a fair price compared to more recent models like the 2022 Highlander.

2017 model received a few recalls pertaining to the Fuel System, Gasoline, Electrical System, Visibility, Equipment, and system. However, most of these are common issues around Toyota and do not affect the vehicle’s excellent 5 out of 5 reliability rating. In fact, the 2017 model did receive IIHS Top Safety Pick + award. This is similar to the 2018 and 2019 variants.

These vehicles retail for about $25,000 to $43,000 and provide excellent fuel economy, safety control features, and performance. You can expect smooth rides and responsive systems with these vehicles as they have few serious complaints. In addition, these vehicles feature better crash ratings and have the beloved direct fuel injection system.

The common issue you may encounter is the tailgate problem. Here the tailgate can refuse to open when unlocked. Some fuel pump failures have affected the vehicles since the 2014 models, but there are recalls to fix this issue.

What should you consider when purchasing a used Toyota Highlander?

The most common issue across all the Highlander models is the engine problems. These range from engine stalls to threads from engine bolts, coolant leaks, and engine overheating. This is a serious issue across the first and second generations, especially the 2003 model.

Most owners fixed the issue by getting a complete engine replacement/remake or changing/repairing the bolts and bolt holes on the engine. Unfortunately, it is an expensive repair that can cost you more than the value of the early models.

Fuel system problems are prevalent in the 2014 to 2019 models. There was a recall for the 2014 model, which involved fuel leaks that could lead to fire risks and explosions. 2018 and 2019 models also received a recall for their faulty fuel pump that caused the engine to stall.

Fuel system issues are significant problems that can cost you a lot of money to fix. For example, faulty fuel pumps make it hard for your vehicle to start, and you can spend between $1000 and $1500 replacing a Toyota Highlander fuel pump.