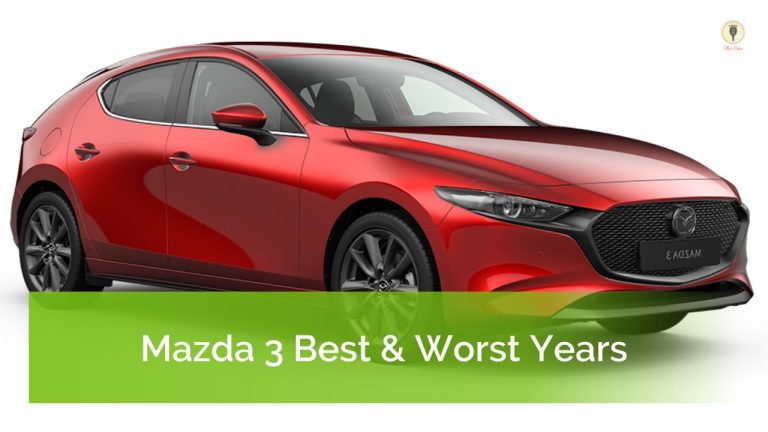 Mazda 3 is a spectacular and unique compact car introduced in 2004. The car has gained an exceptional reputation based on its efficient, zippy, and relatively affordable price. Its stylish and sleek design makes it the best car that has transformed mainly since the first generation.

Therefore, Mazda 3 has become a favorite compact based on its sporty performance and reliability. All the great features and specifications of the car are why it is the best-selling, admired, and most sought compact. However, despite its excellent reputation, Mazda 3 is not limited to problems because everything cannot be perfect.

The fourth-generation model vehicles are the best cars you should know. These years include 2018-2021 since they offered exceptional features that outshined the common problems experienced in the previous, making them more reliable.

Mazda 3 has passed through 4 generations since its debut in 2004. Each generation takes five years, which forms the basis for developing new designs of compact vehicles with improved features

The worst years to avoid are when customers raise many issues about the car model. Since customers were disappointed about the problems with the car, they made a lot of negative reviews and complaints that impacted the buying and need for the compact largely.

Even though 2004- 2007 were lovely cars, engine and transmission issues such as noisy engines and struggling to switch between gears were experienced.

The shifting of gears was rough, making transmission in the operating systems uneven. Uneven transmissions affect how wheels operate, causing the car to decelerate swiftly. The 1st  and 2nd  gears cannot transfer power effectively from the engine to the wheels. Also, when the driver’s airbag deploys, the steering wheel could shatter and scatter fragments into the car cabin.

The first years of the second generation reported many issues. This resulted from the redesign of features that did not go well with the technologies of the given period.

Clutch failure was regularly due to a failed hydraulic master and loose clutch cable. Also, the melted dashboard was dangerous since it created a glare on the windshield because its shiny appearance made it hazardous on roads.

The year still experienced some problems resulting from the previous years not being solved.

The warping of the dash was regular since the glue holding the parts could melt at high temperatures or when exposed to direct sunlight. Moreover, the leaks in the hydraulic line could cause contamination, affecting the clutch functionality. The issues relating to lighting systems were imminent because of loose connections with worn-out fixtures inside car parts.

The clutch’s grinding and whining were frequent, causing unpleasant noise since the collar collided with the end gear. This occurred when shifting from third to fourth gear due to worn-out bearing.

2014 saw the development of the third-generation Mazda 3 with a new engine that was more powerful with better fuel economy. Even with these benefits, electrical and brake issues were common.

The brake actuator shafts could wear down quickly, causing them to disengage prematurely, thus affecting drivers’ safety while on the road. In addition, electrical problems, essentially a malfunctioning alternator, made the engine fail when booting, causing many inconveniences.

The best years of Mazda 3

The best years were when customers rated the model cars highly based on their performance and efficiency.

The 2017 Mazda 3 is a model of the 3rd generation. The standard car comes with five different trims with a highly designed cabin.

2018 is the best year you should embrace with all your hands. It is a solid car that comes in a sedan body style. The model primarily capitalizes on the 4th generation redesign features that are superb.

This is the best year that saw a lot of transformations in the design of the car model. Mazda 3 2019 comes in handy with nine different trims, superb brakes, and manual transmission systems.

The model car offers the best performance with a 2.5L four-cylinder engine, all-wheel drive, and an optional FWD system. The super brakes are excellent, thus offering efficient stability and safety. With great supportive seats and sufficient capacity for holding cargo, the quality of the interior of the car is exemplary.

Mazda 3 for 2020 is the best car model in the fourth generation. Redesigning has improved the car model to be quite responsive and appealing.

The car is highly improvised with the latest technologies: skyactiv to ensure high compression ratios suitable for fuel consumption. Mazda 3 comes in handy with manual transmissions, more than eight trims, and more functional safety standard features. The automatic brakes help prevent a potential collision by reducing the speed of a moving car.

Mazda 3 for 2021 is an advanced upscale model with the best features. Many customers like this model because of its sleek design. Even though the car model is the latest, it offers comparably the same features as the model for 2020.

Improvising and designing the car with a sharp edge helps streamline its speed, thus moving faster. Also, the cabin is highly equipped with numerous features to guarantee the comfort and safety of the user. Therefore the car provides alluring facets suitable for luxury like soft-touch unique surfaces.

How long can Mazda 3 last?

Mazda 3 is a durable car that can go 200,000 miles at a minimum. The latest generation models can easily last even more above the stated mileage. For respectable car owners, the mileage can rise to 350,000 miles.

The good thing about Mazda 3 is the level of care you put up to sort every issue arising. Therefore, changing car fluid and doing regular inspections is the key. This is because changing the fluid reduces the wear and tear on the engine devices.

Is the Mazda 3 a reliable compact?

For a long time, Mazda 3 has built its reputation, and it is one of the best known and sought vehicles. The safety, high performance, and efficiency in saving fuel make it a great car model that customers can rely on.

Therefore, Mazda 3 is a reliable car based on a repair pal report with a reliability rating of 4.0 out of 5.0, taking position nine amongst 36 compact vehicles.

Additionally, the annual repair cost is approximately $433, significantly less than other compact cars by a deviation of $220.

What does the Mazda 3 use, a timing chain or belt?

Typically, Mazda 3 models use a timing chain with few trims using a belt. However, the past generations in this respect use the timing chain, which Mazda 3 has incorporated in the Skyactiv technology.

Mazda 3 is a solid car that has gained much reputation with gradual improvements that keep taking place. Mazda 3 will evolve to the undisputed peak of efficiency and high performance with more excellent technologies and advancements.

Although issues cannot end ultimately, Mazda Company has been on the lookout to improve its perfection on compact cars.