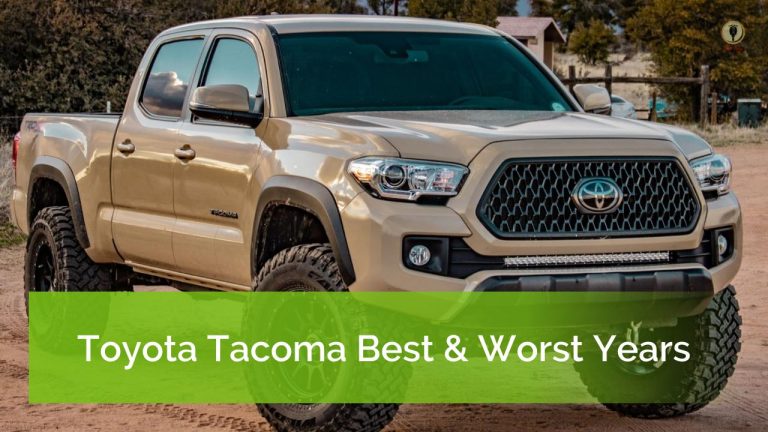 Toyota Tacoma is one of the most reliable Toyota vehicles on the market. You can easily get a 1995 to 2004 model that won’t cost you any serious problems.

However, the Tacoma vehicles have their defects like all vehicles. 2009 and 2016 have the most reported complaints on sites like Car Complaints and the NHTSA. Some of the issues include peeling paint, transmission shifting issues, and sticky accelerators.

The Toyota Tacoma years to avoid when buying a used car include:

Below are the best years to look for when purchasing a used Tacoma:

The Tacoma is a practical pickup truck, albeit pricey. Even older models like 2005 and 2004 cost over $9,000. Therefore, it is more economical to buy a used model to get the most out of the money. However, this brings a few challenges as some of the issues with Tacoma are more prevalent after a particularly used mileage.

According to Consumer Reports, like most vehicles, the early models have lower owners’ satisfaction ratings than newer ones. They, however, have higher reliability ratings, especially 2000, 2001, 2003, and 2004 models. The most common issue with these models is peeling paint.

2004 models have the peeling paint issue that is common with older models. It has structural issues with its frame, especially past 100,000 miles, on the mid chassis up to the front chassis. Owners reported that the frame would rust, rot, and have lots of corrosion. The excessive rust and corrosion led to poor structural integrity since most frames broke and caused accidents.

According to the NHTSA, the vehicle received five recalls and over 350 complaints. In addition, it scored 3 out of 5 on the NHTSA front driver-side crash test and 4 out of 5 on the front passenger-side test.

One of the severe issues that mandated a recall was the ball joint failure. The issue involves the lower ball joint, which is said to separate from the knuckle. This can lead to loss of steering control and eventually cause a crash and serious injuries, even death.

The most recent recall is a 2012 one that deals with the spare tire carrier. According to the NHTSA, corrosion of the attachment plate can cause the spare tire to detach during vehicle motion. This can become a road hazard as it will increase the chances of vehicle collisions and accidents on the road.

2005 is ranked as the worst year of the Toyota Tacoma according to Car Complaints. There are over 800 recorded complaints about this vehicle, and it has ten recalls filed by the NHTSA. Most of the severe issues with this model include electrical system failures, engine, engine cooling problems, steering, powertrain, and suspension issues.

One of the recalls involves accelerator pedal entrapment. The accelerator pedal on the 2005 model can get stuck, which can cause the vehicle to keep running at high speeds. This makes it difficult to stop the vehicle and leads to a crash, serious injuries, or death. Many customers reported their vehicles accelerating suddenly and having difficulty to brake, causing multiple crashes.

Engine problems this year start between 60,000 and 100,000 mileages. The problems range from engines that have a hard time starting, sudden acceleration, blown head gasket (less common), and engine cooling problems. Despite these severe issues, the most reported problem with the 2005 Tacoma is peeling paint and the frame rusting as in the 2004 models.

Parking light problems were the most frustrating since the lights would overheat and crack. The issue was more prevalent in vehicles that had exceeded 40,000 miles. The problem is not as severe as suspension issues, but a malfunctioning parking light can be dangerous in low visibility situations.

There are over 680 complaints on Car Complaints, and the vehicle received 13 recalls. One of the recalls involves the common accelerator pedal entrapment as with earlier models. Another severe recall filed in the NHTSA involves faulty seat heater wiring. The wiring is faulty since it can short, causing an increased risk of the seat burning, leading to personal injuries and a fire risk.

2009 Tacoma costs more than $9,000, making it a lousy purchase considering the many issues. Most of the problems you will experience with this car have to do with the interior electrical systems. For example, the radio may fail to work correctly because of bad wiring, the lights will burn out and fail to light from time to time, and some sensors may fail to provide accurate information.

2016 is the most complained about the year of the Toyota Tacoma. Many complaints record several transmission and engine issues. The engine is thunderous, with a few cases reporting clicking sounds from the engine bay. Owners also reported many vibrations from the engine and engine stalls that led to power loss and braking difficulties.

The most recurring problems seem to deal with the drivetrain in particular. Customers reported the vehicle jerking at low speeds as well as high speeds. The drivetrain seems to be unresponsive, requiring several tries to get it to shift gears. There are also transmission slips, especially when moving from park to drive or reverse.

Below are the best years for a used or new Toyota Tacoma. These vehicles come with some of the best features and very few cases of severe issues like transmission problems and engine and brake issues.

2014 Tacoma retails for about $14,625 – $24,000. It is a highly beloved vehicle among truck enthusiasts due to its off-road capabilities, comfortable ride, and easy access to TRD performance parts. Some may consider the vehicle a bit outdated with its engine and transmission parts. However, it makes up for this by providing a goof daily drive and impressive off-road capabilities.

The 2.7L engine can produce 159 hp at 5,200 RPM with a torque of 180 at 3,800 RPM. Automatic transmission may be of an older generation, but it still provides smooth shifting with very few complaints about its reliability.

With the best safety features and have little to no major complaints, you can never go wrong with the recent Toyota Tacoma models. And NHTSA gave the 2018 model a safety rating of four out of five stars. The advanced safety features like lane departure warning, forward collision warning, adaptive cruise control, and a rearview camera make these vehicles a must-have for safety.

2018 to present engine produces a minimum of 159 horsepower with the 2.7L engines. Expect great towing capacities of more than 6,800 pounds and a payload capacity of more than 1,600 pounds. Fuel economy in these vehicles is accessible even though it is not the best among the Toyota Pickup lineups.

What to consider before buying a used Toyota Tacoma

When purchasing a used Tacoma, the first thing you want to pay attention to is the number of recalls the vehicle has received. This can help you avoid years of multiple recalls, thereby saving on expensive repairs. It is also essential you go through the common issues with the particular model to have a general idea of the complications you may face.

Here are a few factors to consider when purchasing a used Toyota Tacoma:

As you can tell, transmission failures, shifting problems, and unresponsive drivetrains are common problems with these vehicles. The issue has not been completely solved in the Toyota Tacoma group but is less so in recent models than earlier ones. You can expect to experience these issues majorly with the automatic transmissions from earlier generations.

A lot of reports have pointed to severe issues with the ball joints. Premature wear of the ball joint caused multiple recalls between the 2001 and 2004 models due to the severity of the failure. This issue can lead to road accidents, injuries, and even death. Some of the causes pinpoint improper finish in the joints that lead to premature wear. It is important to look at this issue since repairs can cost more than $1000 in severe cases.

Many models between 2005 and 2013 reported some issues with the lighting, especially the amber front parking lights. The cases involved the lights cracking and melting the case. Depending on the severity, you can fix this issue with less than $200. However, it is essential to avoid models with these issues since you must have a lens and cases that can withstand the heat.