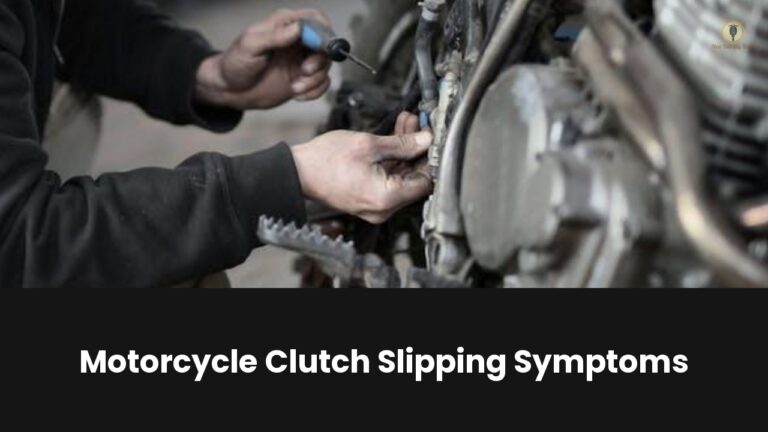 Motorcycle clutch slipping is a common problem experienced by riders. A clutch is a lever in a motorcycle handlebar used to disengage engine power to change gears. Whenever you pull it, power is disengaged in the rear wheel to give room for the addition or subtraction of gears. The clutch has springs that are pulled or pushed to dislocate the engine power.

As a biker, be equipped with knowledge on motorcycle clutch slip, solve the problem, and prevent measures.

If you are an experienced and attentive rider, you will notice clutch slip at its early stage; otherwise, you be surprised to see your bike slow as you add gears. Here are the most common motorcycle clutch slipping symptoms:

If you are keen enough when riding, sometimes you will notice your bike does not accelerate even after shifting gears. When shifting gears, you hold and release the gear lever but limited or no power transmission is transferred to the engine. So when this occurs, the bike either accelerates at a slower rate or decelerates. The high engine revs result in high rpm and a slow acceleration rate.

Take the issue seriously as it occurs because you can lose your motorcycle acceleration anytime. Sticking clutch can sometimes be confused with general bike malfunction, and it can be the worst, though. Assume clutch slip occurs while having fun with friends in the city’s outskirts; how will the feeling be if your friends proceed with the journey while you are stuck in a garage? Indeed, it’s so tragic to be in such a situation.

Even a recruit can realize the gear lever is hard when pressing. It will not matter whether it’s your first time or not; you must realize clutch slip as soon as it happens. Hardened gears are caused by a lack of separation between the clutch plates and friction. At the early stage of clutch slip, you will realize unpleasant noises from the clutch and sometimes wear and tear in clutching components.

4. Failure to shift in gears

If your clutch cable is loose or the clutch separation is squeezed, no gear will get in, and the bike will not accelerate. It’s advisable to leave your bike at neutral when parking it, but some will leave it in one gear.

Always start your bike at neutral to avoid clutch dislocation and overheating. Overheating expands the metal components hence reducing the separation distance. Though the clutch depends on friction to transfer power, lubricate the metallic components to reduce the heating.

If your motorcycle tends to slow the mileage, the cause is slipping clutch. The indication of low mileage is high rpm with but slow speed. The engine will burn a lot of fuel to power the rear wheel, but the absence of gear causes the clutch to slip.

The joy of riders is navigating corners and riding at the top of their speed with efficiency. When a malfunction occurs due to clutch slip, riders experience the hardest feeling. High rpm with low speed is a symptom of clutch slip, and visiting the nearby mechanic will be better.

If you’ve been noticing an unusual sound coming from your bike lately that just won’t go away or get louder as the days pass, then it could be a sign of clutch problems.

A burning smell can indicate a problem with your clutch and should not be ignored. If burning rubber or metal smells accompany the noise, you may need to get it checked out as soon as possible before any further damage occurs.

What may cause motorcycle clutch slipping?

Clutch slipping can occur anytime, regardless of how frequently you inspect it. If it occurs, do not be worried, as this paper gives detailed reasons why your clutch will slip.

The friction in the clutch components causes overheating, especially when they are not lubricated frequently. Since the clutch depends heavily on springs to engage and disengage power, they should be oiled when needed. For safety, don’t ride for long distances without cooling. You can cool for at least half an hour and then proceed with your journey.

2. Adjustment gap of your clutch cable

The clutch cable connects the gear lever and the crankshaft gear plates. The motorcycle manual provides the adjustment length of the clutch cable and so confirm before readjusting it. If the length is varying, then clutch slipping is likely to occur. Similarly, the clutch cover should be adjusted to leave room for the free play of the clutch cable.

Have you changed your oil recently, and the clutch slips? If so, the problem is clutch slipping, which has been caused by the oil used. Always use the recommended oil from an expert or refer to the manual.

The clutch plates are mounted on the friction plates, and the clutch uses the springs to disconnect them when pulling in. Since it’s normal for metallic components to undergo tear and wear, the clutch will wear over time, and replacement will be better than repairing.

If you are unable to notice friction on the clutch components, do not worry about it. Worn-out clutch parts have a different color from the original one and an unpleasant smell due to burning.

Clutch springs pull in and out clutch plates, thus creating room for gear shifting. If the springs are broken or the specs change, then the result is clutch slipping. Indeed, the clutch springs should adjust and readjust freely at a constant rate.

Sometimes you may get confused when a brand new clutch slips. Some motorcycle clutches are designed so that the clutch is leaving limited space for the clutch to operate. If so, consult a competent mechanic to redesign it. Some motorcycles have hydraulic clutching systems and others manual. The hydraulic clutching system has an advantage over manual ones so getting the former is better.

7. Too much oil in the transmission or engine

You should always make sure that you have the right amount of oil and never put in too much. Putting too much will cause problems, including clutch slips.

How to keep your clutch healthy

Sometimes your motorcycle can fail to function as required due to clutch slip, but it is not always true. Though clutch slip is common, your motorcycle can also be old. It will be awkward to expect 100% efficiency from an old machine and replace the clutching system immediately you notice abnormal functioning.

If you are not in a race, there will need to over speed and frequently engage the clutch. When the need arises, pull in and out slowly, and the clutch will thank you for being responsible.

When taking off, start from zero at gear one and accelerate to the recommended speed. You can be a riding enthusiast and motorbike racing your career, but your motorcycle is not designed for that. Unknowingly, you will put pressure on it to accelerate, and this will take you to the next garage to replace the entire clutching system.

To be safer, ride responsibly. Responsible riding also involves using a hand brake on hilly roads instead of a clutch to slow down. If you are not aware, frequent stop and go increases friction on the plates, thus reducing the lifespan of your entire clutching system.

Never use the clutch as a breaking alternative.
Unless you are insane or on a rally, never use the clutch to stop or slow down. If you are not aware, take it from me. New brake pads are cheaper than replacing the clutch and so use the breaks for stopping. By so doing, less force will be applied to the clutch hence increasing the lifespan.

How Does a Motorcycle Clutch work?

This neat animated video explains how a motorcycle’s clutch works:

To sum up, the only way to take care of your coins is riding responsibly; otherwise, the garage will always be your next stop. Clutch slip is a problem that you cannot run from unless you do not ride. When it occurs, change or repair depending on the extent of the problem and age of the entire clutching system. Clutch slipping videos are available on YouTube.

If your clutch is hydraulic, you are better positioned to save a pretty coin because pressure does not cause friction in the gear assembly.

1 thought on “Motorcycle Clutch Slipping: Symptoms and the Causes”