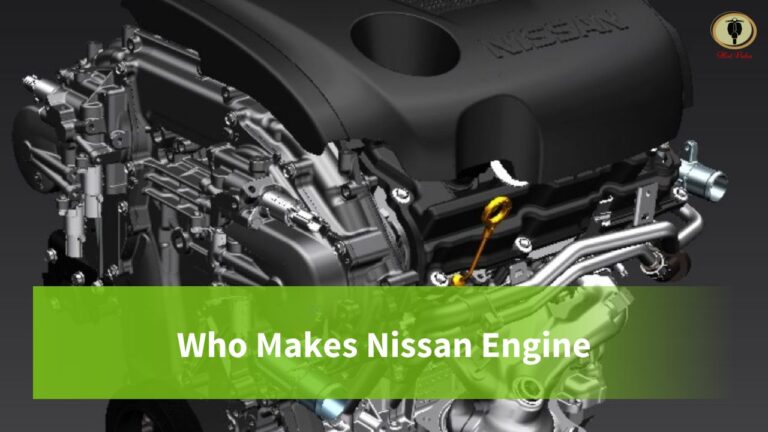 Nissan Motor Corporation makes Nissan Engines. These Engines are the best in the business and are known for their durability and dependability. You can’t go wrong with a Nissan Engine.

Here you will learn about who makes Nissan Engines:

A lot of people have been wondering lately where Nissan engines come from. I will give you a little history of Nissan and information about this powerful company.

Nissan started as DAT Motors in Japan in the 1930s. DAT Motors made primarily commercial vehicles during this time.

Are Nissan Engines Any Good?

Nissan is the clear choice for finding engines that excel in all areas. The engines of their cars are known for being solid and dependable. That’s why people like to buy them. Not only are Nissan engines robust and dependable, but they’re also affordable, making them an excellent value for your money. So if you are looking for a good engine, then Nissan is the brand you should buy.

Nissan has too many car engines. But here are some popular engines:

The MR is a family of engines that are 16-valve. They are made up of all aluminum. Renault’s MR engine has variable valve timing, and Nissan also has an engine with the same name.

The QG engine is a straight-4 piston engine in 4 different sizes: 1.3 L, 1.5 L, 1.6 L, and 1.8 L. It is made from aluminum and has 4 valves per cylinder with variable valve timing and NEO Di direct injection as optional features.

Nissan engines are well-known for their reliability. The Nissan 3.5 engine is a perfect example; it is a reliable engine found in most Nissan cars. It has consistently proven to be one of the most dependable engines available, and its reliability cannot be questioned.

How does Nissan Engine Warranty work?

If you are looking for a powerful and dependable engine, Nissan is a perfect choice. Not only are their engines reliable, but they also come with a 3-year warranty period. So if you’re looking for peace of mind, Nissan is the brand for you.

Nissan engines are the best choice for a long-lasting engine. Honda and Toyota engines may be good when you first start, but Nissan engines offer much lower maintenance costs in the long run. Plus, their advanced technology means that your car will run more smoothly and efficiently for a longer time. So if you’re looking for an engine that will last you for years to come, a Nissan is the best option!

Why You Want One

Nissan engines are a popular choice for many drivers. They are known for their power and reliability, offering a great driving experience. Some of the most popular Nissan engines include the CA18DET and the SR20DET.

These engines offer outstanding performance and reliability, and they are perfect for drivers who want to experience the best that Nissan has to offer.

When your car Engine needs a Replacement?

Here are several ways to tell you if your car needs an engine replacement:

If you hear a knocking noise coming from your engine, likely, the engine bearings aren’t getting enough lubrication. This can cause them to seize and stop working correctly. This problem can also be caused by the engine bearings wearing out from high mileage. The engine bearings support the motion of the engine’s moving parts, so if they’re not working right, the whole engine might need to be rebuilt.

If your vehicle is having a hard time getting up to speed, has a rough engine idle, or struggles to start, there might be a problem with the engine—many things, such as a problem with the sensors or dirty filters. But before you rule out mechanical engine trouble, take the vehicle to a local auto shop for a test drive and computer analysis. This will help find the exact issue.

If your vehicle is getting low gas mileage or consuming high amounts of fuel for no apparent reason, the engine could be the culprit. If you notice more fuel consumption than usual, there might be an issue with how your car’s engine performs.

If your engine keeps stalling stuttering, the inner of the engine might be having issues because it is not strong enough to keep going. When the engine is performing improperly, this can not only affect your vehicle’s performance but also make it unreliable.

An engine oil leak is widespread in most cars. However, there are times when a problem with an engine is caused by one. It might be hard to determine what exactly is wrong with the car until you have the car properly inspected. If the engine oil is leaking, you should have your vehicle looked at by a mechanic right away.

6. The Check Engine Light comes on

A check engine light that turns on could be caused by many different problems with your vehicle’s engine. Some common issues are faulty air sensors, an issue with the engine’s mass airflow, or a problem with the vehicle’s catalytic converter. The light could also indicate a fuel pressure issue, in which case you should have your car looked at by a mechanic to determine what exactly is wrong.

The material that comes out of your car’s tailpipe is an obvious sign of engine failure. If you see colorful smoke coming from your vehicle, there’s a good chance there is an issue with the engine.

The color of the smoke can help you identify the most common problems with a car. Knowing these colors can save you time when trying to fix the problem.

When you see black smoke coming out of your car’s exhaust, there could be some serious problems with it. The most common cause is an oil leak which can manifest itself in many different ways like damaged piston rings or worn cylinder walls – all things that require professional help!

When your car is burning more fuel than usual, it might be because of a clogged air filter. However, the smoke from this problem will decrease performance and cause poor gas mileage, so make sure to check other potential causes such as faulty injection systems or blocked manifold before blaming them for everything!

If you see a thick white/gray plume coming out of your tailpipe every time that engine starts up, there may be an issue with either the head gasket or the cooling system. “As soon as it overheats,” says automotive journalist Paul Brand, “the combustion chambers will release coolant through its exhaust.” This could lead to leaving on the roadside if not addressed immediately!

Smoke pouring from the tailpipe is an indication that there may be something wrong with your car. It could mean a cracked block or cylinder head, both of which need to be addressed immediately for safety purposes!

Here are some questions and answers to help you more about the Nissan Engines:

Where are Nissan Cars made?

The Nissan cars are made in Japan, North America, and worldwide.

Where are Nissan Engines made?

Nissan engines are made in 22 countries. The headquarters are in Yokohama, Japan.

Nissan engines are a popular choice for drivers looking for a robust and reliable engine. Nissan offers a 3-year warranty on all of their engines, and they are known for their advanced technology and long-lasting performance. Their engines can be put together from various inter-cooling parts, and they offer outstanding performance and reliability. If your car is having a hard time getting up to speed, has a rough engine idle, or struggles to start, then it might be time for a Nissan engine replacement.