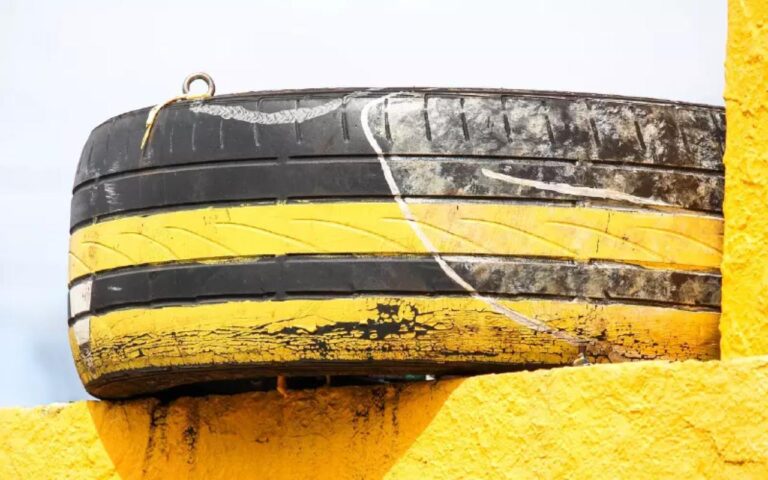 Putting tires on the roof is noticeable if you travel around the south. If you’ve traveled around New Mexico, you will see that this is a common practice. Why do people put tires on their roofs?

Worn-out tires serve as roof protection from strong winds. These also help prevent the roof from rumbling. Some people put old tires as it becomes a usual practice in their community. Some think tires on the roof help prevent their house from being hit by lightning.

Putting tires on roofs is not only common in the south. It is also prevalent in developing countries prone to typhoons, such as the Philippines and neighboring countries.

In Southern Africa, people put tires on their roofs, believing that it would drive away lightning.

Read on and explore further why people put tires on their roofs.

Using tires as roof protection is probably one of the most plausible reasons people put ties on their roofs. If you have noticed, tires are prevalent on trailer home roofs. People do this to keep their roofs from being blown away by strong winds.

The construction of these makeshift homes is not as reliable as standalone houses, making them prone to losing some tin sheets when strong winds strike. You’ve probably seen from the news some footage where tin sheets are flying all over the area because of strong winds.

In developing countries, people build their houses using light materials. The standard process is to use umbrella nails to attach the tin sheets on the wood roof frame, and if strong winds trikes, these sheets could quickly fly away.

Putting old tires on the roof adds more weight so that the tin sheets stay attached to the roof frame during typhoons, hurricanes, or strong winds. I have even seen some people tie the tires together to ensure that they give more protection.

Thus, the idea of putting tires on roofs appears to be a brilliant move discovered by people to ensure safety.

I am not sure if you’ve experienced this, but rumbling roofs happen every time there is a strong wind if your home uses tin sheets. The strong wind may not blow away your roof, but you would have to bear with the resonating rumbling sound the tin roofs make.

Back to the trailer homes, these mobile homes often have structural integrity issues. There is a problem with the braces and trusses being far apart. Now, these braces and trusses hold the tin roof. If they are installed far apart from each other, the tendency is the thin tin will make that annoying rumbling sound when wind passes by.

The tin roofs will not only rumble during strong winds. They do make noises as well when the sun is at its zenith. How did people remedy the rumbling roof issue before they started putting tires on the roof? People used to drill holes and use rumble screws. Some use tie wires to solve the problem.

Based on testimonies, putting tires on roofs is better and safer than drilling holes on roof membranes. There is no scientific evidence that proves this, but it does make some sense.

There is a belief that trailer houses are prone to lightning incidents because of their metal components. Some people fear living in trailer homes because they think it is a lightning magnet. Well, if you ponder on it, it does make sense. Metal is a good conductor, so maybe, there is some truth over this belief.

But what does the Metal Construction Association has to say about this? Surprisingly, the association does not support the idea and clarifies that metal roofing actually makes the lightning strike less dangerous if it does happen.

As pointed out in the association’s article, the presence of metal does not affect the location where lightning would strike. Geography, topography, and storm movement govern the exact location of a lightning discharge. Therefore, the belief that metal attracts lightning appears to be false.

Who would have thought that we were wrong all along? When we were kids, my mom would always shout at us whenever there were thunderstorms to shut the TV off and stop using any electronic devices. “Do you want to die? Do you want to be hit by lightning?” These lines still live in my head until now.

It does feel a little awkward knowing that the belief is not valid. But hey, if people continue to believe in this perspective, maybe we let them continue putting tires on their roof. After all, all they want is safety. Plus, setting tires on roofs is an excellent way to give more space to our landfills.

In South Africa, the same belief that tires help prevent lightning is also going on. If you have not known yet, many people die in Africa due to lightning strikes. Thus, you cannot blame them for embracing possible solutions to avoid the incident.

A group of researchers studied the beliefs surrounding the myths about lightning in the southern part of Africa. Among the myths covered in the study are hiding in a tree keeps you safe, using a cellular phone attracts lightning, and putting tires on roofs protects you from lightning.

The researchers pointed out that these beliefs could be part of why fatalities increase year after year. It is because they give a false sense of safety. I would say the researchers do have a point in their conclusion. It can be funny to think that you are not vulnerable to lightning strikes if you have tires on your roof.

Tires on the roof as a standard practice or what others call “charm of the rural life” could be another reason you see tires on the tops of houses. It is beyond explanation how certain traditions and practices are being passed on from generation to generation.

There is a beautiful story about why people in the past cut the head and the tail of a fish when cooking. The actual reason was that the pan was too small for the fish. However, since we simply followed how people do it, it became a practice for most.

The same story goes on about why we see tires on the roofs of houses. The younger generation doesn’t even know why they put tires on their roofs, but they do it anyway. It is because their granddad or grandmas did it.

Or, it could be that all the roofs in the neighborhood have tires, so why not follow? It does not make sense, does it? However, trust me, people do crazy stuff to feel that they belong in the community.

A Way to Recycle

Some people who have tires on their roofs do it for a good purpose – a way to recycle tires. What else is way better to recycle worn-out tires but to keep your roof safe from strong winds and roof rumbles?

When you replace your tires at your trusted local shops, the shop usually charges you a few bucks for discarding the used tires. For me, this sounds like an environmental fee to some extent. So, instead of paying extra dollars, people resort to putting tires on their roofs. It sounds like a wise move.

In some communities, you also see some people convert old tires to swings or plant pots. These, too, are an alternative way to recycle old tires.

You see tires on the roofs of people’s houses for various reasons. Some of the reasons are plausible, but some are not.

Some people put tires on their roofs to protect the tin sheets from strong winds. Strong winds would likely blow away thin tin sheets if they are not adequately secured. Putting tires on the roof adds weight and minimizes the wind’s likelihood to blow the roof away.

Roof rumble is another issue that old tires can address. Putting tires on the roof avoids or minimizes the rumbling noise roofs make during the presence of strong winds or when the sun is at its zenith.

Apart from the reasons mentioned above, an old belief that tires drive away lightning is also evident. People living in makeshift homes tend to believe that they are prone to lightning because of the metal construction of their homes, but this has no scientific basis.

Researchers warn people from believing these myths because they may expose them to more risk because of false security.

Some people, they consider putting tires on their roofs as a way to recycle old tires. Old tires go to their roofs as an added protection. This way, they can save some pennies they pay to dispose of the old tire and help the environment.

Some people just put tires on their roofs because of neighborhood influences. In some areas, setting tires on roofs has almost become a tradition so that when someone replaces their old tires, they do directly to the top of their homes.