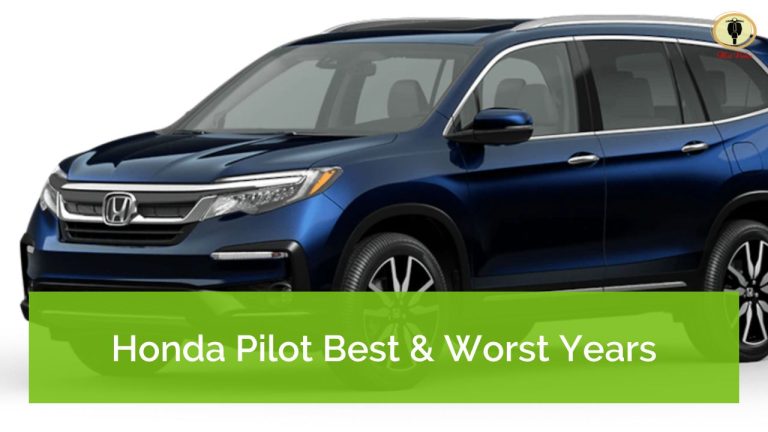 Honda Pilot is one of the most beloved family cars today. The 2012 Honda Pilot was honored as the “Family Car of the Year” from Cars.com. The model was introduced in 2003 into Honda’s mid-size crossover SUV category. However, despite its reputation as a reliable and safe family vehicle, the Honda Pilot has had some issues over the years.

The model years you should avoid:

These years consist of major problems like transmission failures in the 2003 Honda Pilot model and excessive oil consumption in the 2009 model.

2015 and recent models (from 2017 to the present) are much more reliable and sorted out due to their huge amenities and technology.

The Honda Pilot spans three generations. The first generation began in 2003 and had a couple of alterations and changes till 2008. The second generation took over in 2009 and lasted till 2015.

The third generation is the current running era, with its first vehicle debuting in 2016. Despite all the upgrades, the Pilot has always remained an 8-seater SUV with a towing capacity of up to 5000 pounds.

Below are some of the years you should avoid when buying a used Honda Pilot:

2003 Honda Pilot is the most unreliable due to its massive list of complaints. Electrical issues are the most common, including topics like ignition switch failures and door locks that don’t work properly.

Please do not buy the 2003 Honda Pilot, especially when it has exceeded 100,000 miles. Transmission issues and ignition switch failures are more common after that mileage.

The more common issues in the 2003 model got transferred to the 2005 vehicles. Such matters included major problems like transmission failures. Transmission fluid leaks are also common problems in this model, especially after 120,000 miles.

Bad torque converters are also common issues that cause the SUVs to stop randomly and without warning. This is a severe problem as it can cause accidents if the brakes get pressed accidentally by the bad component.

Takata Airbag Inflators were used in the Honda 2005, later recalled due to frequent failures. The issue was severe, making it the biggest automotive recall in the United States. Peeling paint is another common problem in the 2005 Honda Pilot, but it’s a minor issue unless you live in wet climates.

The main complaint of this model is warped rotors that cause a vibration when braking. Rotors have to be machined or replaced to fix this issue, resulting in expensive repairs.

Electrical issues are also common, with many cases involving overheated wire harnesses that may cause low beams to fail. Another minor issue is the MAP light that does not come on when the door is opened.

Peeling paint is a common issue in the 2013 model. It starts as discoloration and then proceeds to full sheets of coat peeling off. The problem is linked to the low-quality primer and paint used by Honda. Despite that, most cases of the paint peeling issue come from owners of the blue, black, and red models.

Warped brake rotors are among the major issues which cause vibrations when braking. The vibrations happen at high speed and can sometimes be accompanied by clunking noises when braking. Many note that the brake pad shims are the main cause, costing only $30 to $80. However, the brake rotors can be the issue, leading to expensive replacements costing at least $150-200 each, or $600-800 for 4 rotors.

NHTSA reported over 370 electrical issues with the 2016 Honda Pilot. Other complaints included over 250 engine issues and over 125 drivetrain problems. Fuel injector malfunctions are also common once the vehicle is past 59,000 miles, a problem that takes more than $1000 to fix.

Below are some of the best model years you should consider when buying a used Honda Pilot:

2017 Honda Pilot is one of the most reliable models you can depend on. The few issues customers experience with this model year include a clunky automatic transmission and an inconvenient infotainment system. You may also experience excessive wind noises.

It features a powerful V6 engine that comes in a 3.5-liter configuration. The six-speed automatic transmission vehicle comes with a practical and spacious interior with generous 16 cupholders.

Two thousand eighteen model years carried over the reliability of the 2017 predecessors. They experience very few safety issues, with the common problem being a few cases of rough shifting and transmission slippage. Only one recall has been issued, and it deals with failing rivets that secure the seats.

The NHTSA rates the 2018 Honda Pilot at 5/5 stars from both the rollover test/frontal crash and the side crash test. Advanced safety features that make this model stand out include collision mitigation braking, lane keep assist, adaptive cruise control, forward collision warning, and blind-spot monitoring.

2020 saw the addition of a Black Edition trim to the Pilot lineup. It only has common minor issues that revolve around the infotainment system. NHTSA rates it at an overall score of 5/5 stars in terms of safety.

It is the most reliable model of the Honda Pilot series. Very few complaints have been filed, and the nine-speed transmission is outstanding. In addition, the vehicle is equipped with advanced airbags and features the Honda Sensing tech used to increase awareness on roads.

It is a much cheaper version than the current models while still providing all the best features of this family SUV.

Moreover, the 2015 model features one of the best airbag technologies of the past two decades. The increased safety level was added by using an onboard tire pressure monitor.

Upgrades such as electronic stability control and a more responsive steering system make it an excellent choice for Honda Pilot lovers.

What to check when buying a used Honda Pilot

Here are the factors to check when getting a used Honda Pilot:

Whenever buying any used Honda Pilot, ensure you first check which models have been recalled. A clear view of the recalled issues will ensure you do not get a defective vehicle which will cost you a lot. All the information on vehicle recalls can be found on the NHTSA (National Highway Traffic Safety Administration) website.

Our list of common issues in the Honda Pilot lineup includes many transmission failures. Check with your local mechanic to ensure the vehicle does not exhibit any of these symptoms:

Warped brake rotors can be noticed from a few symptoms listed below. The issue is expensive to repair if you need to replace the rotors. Ensure to identify the issue as soon as possible to avoid extra charges.

Symptoms of warped brake rotors include:

It is also crucial to look at the vehicle’s oil consumption since such SUVs tend to use a lot of engine oil. The peeling paint issue is another common problem to look out for if you do not want to perform a fresh paint job.

What Engine Is In A Honda Pilot?

According to Motor Reviewer, Honda has used several J35 V6 engines in the Pilot:

What are the most common issues in all Honda Pilot model years?

The most common issues in the Honda Pilot series include transmission failures, transmission fluid leaks into the radiator, peeling off paint, excessive oil consumption, engine hesitations when accelerating, and fuel injector failures.

How to extend the lifespan of your Honda Pilot

There are a few practices you can start following to increase the lifespan of your Honda Pilot:

Is the Honda Pilot better than Honda CRV?