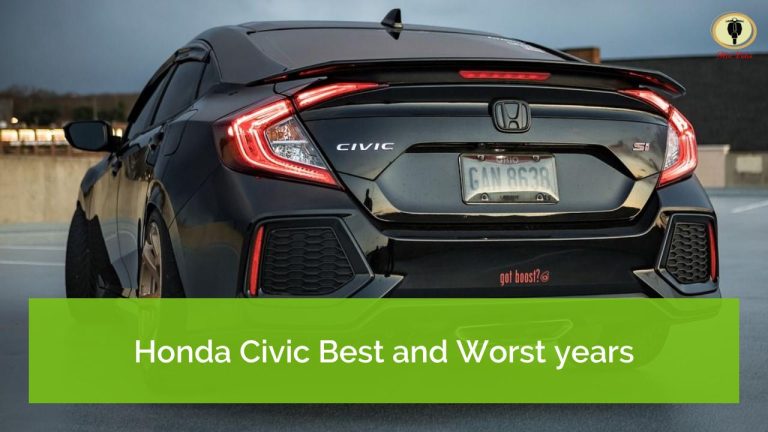 According to a 2022 Insurify study, the Honda Civic is among the ten most popular cars driven on American roads. The vehicle currently accounts for about 2.59% of vehicles on the road and is the most common vehicle in California.

Honda Civics’ broad appeal comes from its innovative styling and high fuel efficiency standards. Despite this, some models have issues and can be a burden to maintain. Some of the Honda Civic years to avoid include:

The best years for the car are filled with excellent customer satisfaction and reliability ratings. Best Honda Civic years include:

Below are some of the years you should avoid if you are thinking of purchasing a used Honda Civic:

2001 is the worst Honda Civic year. These vehicles have the biggest recall in the model’s history, mainly due to airbag issues. In fact, the Honda Civic is one of the most recalled cars of all time, with 27 total recalls from the National Highway Traffic Safety Administration (NHTSA).

Transmission issues of the 2001 model were the most reported cases. These issues ranged from automatic transmission slippage, transmission failure after CEL comes on, and torque converter failures.

Other issues experienced by the 2001 model include poor headlamps and reflectors that reduced visibility and faulty seatbelts. The first recall for this vehicle (nine months after its release) was due to fuel system issues.

The system pumps corroded due to water getting stuck in the pipes, making the engine stall. However, this was not the most severe fuel system issue as NHTSA sooner noticed the bolts securing the system weren’t tightly fitted. This means gasoline leaks were likely to happen and maybe cause some fires.

Though not the best years for the Honda Civic, 2003 – 2005 saw the introduction of the hybrid versions. This is what makes these years the worst. Hybrid vehicles from this era are said to last approximately ten years. Moreover, the cost of repairing minor and major issues is high.

For example, a battery replacement will set you back a couple of thousand, a higher price than the car’s value. In addition, 2003 – 2005 was the first Honda Civic hybrid generation, and the technology was not yet perfected. Other issues included CVT transmission failures, airbag problems, and fuel pump failures.

The 2005 model received 15 recalls that mainly included airbag issues. In case of crashes, the airbags in some vehicles would burst with metal fragments hitting the driver and passengers, causing severe injuries. Other major issues found in the recall reports include fuel system failures that could lead to tank rapture and improperly positioned seatbelts.

One of the most significant issues with the 2006 Honda Civic was cracked engine blocks. Over 800 complaints have been logged to CarComplaints.com, but the engine block issue remains the most common. Engine blocks of this vehicle crack over time, leading to coolant leakages and even totaling the whole vehicle.

Moreover, the vehicles between 2006 and 2008 were part of the Takata airbag recall, which posed a lot of danger to passengers. The fuel-efficient sedan still received a 4 out of 5 rating from NHTSA for driver-side safety and 5 out of 5 for the frontal crash test. Despite this good rating, the vehicle from 2006 also experienced accelerator pedal issues due to improper installation.

The 2007 Honda Civic has nine recalls regarding Takata airbag issues. Like the other airbag faults, this one also included an airbag rapture that would lead to metal fragments hitting the passengers and driver. In addition, service brakes and hydraulic issues are included.

2008 model has a fuel system issue recall that would cause a lot of damage in case of an accident. According to Honda, “The bracket may become loose, which results in damage to the fuel hose connector. A damaged connector could lead to a fuel leak and increase the risk of a fire.”

The main downfall for the vehicles between these years is the peeling paint.  The minor issue is that customers were not impressed by the change in looks from the previous generation. Moreover, the wheels had issues where they would fail prematurely. In this period, the hybrids’ batteries were more durable than the previous generation but still expensive to replace.

The 2016 Honda Civic surprisingly came with lots of issues, from electrical problems to engine issues, transmission failures, and A/C heater problems. Unfortunately, the list does not end there; brake issuer, steering problems, and fuel system malfunctions.

Below are some of the best model years you should consider when purchasing a used Honda Civic:

The ninth-generation Honda Civic from 2012 and 2013 improved on the defects of the 2011 models. These vehicles have few outstanding features, but their performance, reliability, and fuel economy make up for them.

Faulty issues like airbag problems, fuel system issues, and transmission slipping were dealt with ideally in 2012. Performance jumped up slightly, and various trims were introduced to make the vehicles more appealing. As a result, vehicles from this period have some of the least complaints from Honda customers.

2017 till the Present, models are the safest due to their advanced safety features and security protocols. The standard features of the active safety system include the electronic brake distribution, LED Daytime running lights, multi-angle cameras, TPMS, and electric parking brake.

The EX-T trim of the 2017 Civic introduced two temperature control zones, the driver and the front passenger side. Heated front seats make this model one of the most beloved. These years also introduced the push-button engine starter for the driver’s convenience.

Even though they come at a bigger price tag, Honda Civic’s best-performing engines are from 2017. The 2019 model brought about the Honda Sensing suite of features, including a lane-keeping assist system and road departure mitigation system.

What to check when buying a used Honda Pilot

Here are the factors to keep in mind when buying a used Honda Civic:

Check the vehicle model’s recall history on the NHTSA website. This helps you know the most common and dangerous issues that have caused the vehicle to be recalled. It also gives you a general idea of which models are more reliable than others.

The batteries from some models won’t last more than ten years, and others may be too expensive to justify the used car purchase. Keep in mind that some Honda Civic vehicles, as earlier discussed, had electrical issues concerning the batteries as well.

The Heating, Ventilation, and Air Conditioning systems of most Honda Civics are a cause for concern. These systems tend to fail pretty quickly with high mileages. Ensure to check if the systems work well and if any replacements were done.

A licensed professional can note any changes and issues in case you are not familiar with the system. Heating problems can be a pain, especially when they become recurring and make the cabin uncomfortable.

Airbag issues affected lots of Honda Civic vehicles before 2015. These vehicles are dangerous, and you should avoid them at all costs because of their many complaints and recalls. Airbag problems are a significant safety hazard that you should not ignore.

Civic owners have reported engine issues ranging from cracked engine blocks to lousy engine mounts. Unfortunately, the repairs for these issues are usually expensive and may cost more than the price of the used vehicle. A few signs you may look out for in engine problems include vibration, rattle in the engine, fuel leaks, and rumbling noises.