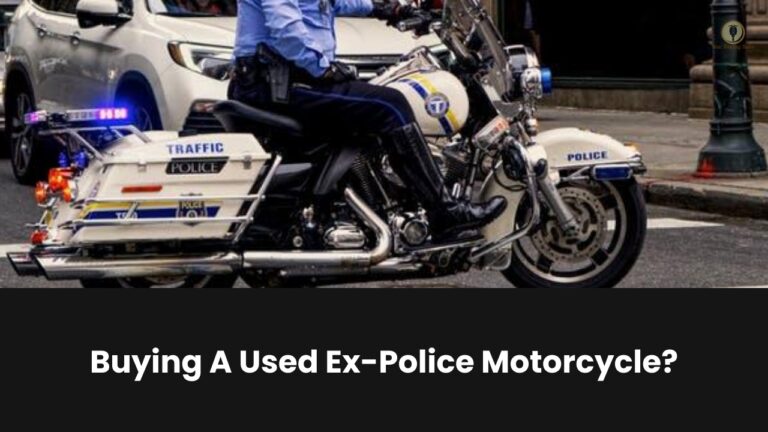 Since we perceive lifestyle differently, some people will boast about riding police bikes while others will distance themselves from police-owned machines. Owning an ex-police bike is an idea with limited people. However, for some people, the pride of riding a police motorbike will overcome the joy of possessing a brand new machine.

The best advice is, buy what you can see or you are confident with. If possible, do complete research on the motorcycle before buying it. If you have comprehensive knowledge, go the business way by opting for the cheapest motorcycle in the market, which is in good condition.

Contents show
Where to find ex-police motorcycles for sale
Direct purchase from the police marketing department
Buying from a private source
What to consider before buying an ex-police motorbike
Fascination associated with police motorcycles
The worthiness of police machines
Reasons for Buying a Used Police Bike
1. Regular upgrades
2. Cost-saving
3. A thumb in maintenance
4. Safety first
5. High performance
Reasons for not purchasing second-hand police motorbikes
1. It is a police motorcycle without the “POLICE”
2. Costly heavy-duty spare parts
3. Lose friends
4. Old bikes
5. Motorcycle misuse
Standard motorbike models for police
Wrapping up

Where to find ex-police motorcycles for sale

You may rush to buy a used police motorcycle and end up in the worst deal. Keenly explore your source, consult the relevant people, or, if possible, request a road test. The sources below are the best for used police motorbikes.

If you can get the marketing personnel, the better. You will get enough information on the bike, maintenance record, mileage, and the duty it has been executing. With that knowledge, examine its viability, basing your argument on the purpose you want to accomplish. The drawback of acquiring your ex-police motorcycle is that road testing will not be provided. They will only give you previous performance, record and if interested purchase it and go without test.

Buying from a private source

Private merchants get the ex-police motorcycles through auctioning and re-sell to potential buyers. I will recommend buying from a private source because road rest will be provided, examine the behavior and any abnormal noises. However, private merchants will sell them at added cost because sometimes they repair and replace worn-out spare parts. So, though you will be overcharged when buying it, you will not incur future maintenance costs. Sometimes you may get a good deal from a relative or a close friend.

What to consider before buying an ex-police motorbike

Unlike vehicles, motorbikes will arrive at the destination faster because they will not be stuck in a traffic jam. Before accepting a deal in buying a used police motorcycle, consider the following;

What a fascinating moment by riding a police motorcycle with a siren, flashing lights, super speed, and acknowledged traffic laws? Sincerely, it is enjoyable. Also, imagine riding a bike with “POLICE” letters written in all parts. To say but a few, police machines have several unique features.

The worthiness of police machines

Evaluating the issue at hand may be challenging but explore the whole process keenly. If you cannot analyze yourself, hire someone to examine the pros and drawbacks to be incurred now and in the future.

At first, present yourself at the time of analysis to examine the physical appearance and internal features. It will be wise to request previous records, the assigned duty, and the area of operation. The year, machine model, and mileage will help too. If the vehicle was assigned to the general fleet, the better because law enforcement officers tend to misuse motorcycles.

If you get one that has been used for escorts, funeral processions, parading, and all light duties, get in the deal without doubts. Should I buy a used police motorcycle? The answer is yes, but under conditions. If it meets the set standards, then buy it. Furthermore, consider the mechanical conditions.

Sincerely, police motorcycles are upgraded precisely when the need arises. Comparing civilian motorcycles with police machines, the former is better than the latter. I want to discuss the internal features of police motorbikes.

The batteries and electrical pipeline are upgraded after undergoing heavy duties. The illumination is inspected to remove dim bulbs, worn-out clutch bars, and competent driveline components.

3. A thumb in maintenance

The maintenance factor adds weight to the pros of police motorbikes. Maintenance is carried out when needed because they need maximum results from it and work with efficiency. No doubt that the spare parts are genuinely replaced in the event of breakage, and the inspection is done regularly.

Big departments get a more significant share of the potato, and opting for second-hand motorbikes will be better. On the other hand, small departments have small budgets hence compromised maintenance.

Police machines are known for the best security features since they are manufactured using quality components. Taking an example of breaking systems and shocks, they will give you the comfort you need plus safety in an accident.

Indeed, police bikes are made to give high performance, to operate on all roads, all times, and for long-term service. Upgrading of suspensions guarantees a smooth ride. In terms of engine power, ex-police bikes have high-speed engines ensuring super speed. No matter how old the bike is, it will perform like a new one even when ridden on rough roads.

Having discussed the pros of getting into a deal of used police motorcycles, now let’s look at the drawbacks.

1. It is a police motorcycle without the “POLICE”

If your thought is purchasing the police motorcycle with the police labels, then you are wrong. The siren, light blue lightings, chassis labeled police, and the additional illumination will be removed. It is illegal for civilians to drive/ride on public roads using police vehicles with lightings, sirens, and police logos. It is considered impersonating a police officer, and you can be charged for it.

Police machines have genuine spare parts, which are expensive, and maintaining them can be costly. It will sound awkward to replace a genuine spare part with a fake one, thus spending an extra coin. When riding an ex-police bike, you are assured of versatility, but when it breaks down, it’s another story. Incurring the extra cost is that police bikes go for regular patrols day and night, thus a high rate of tear and wear.

It is natural for civilians to be anxious when they come across police machines. It will sound different when they realize it was not police and develop a negative attitude towards you. Riders will ride instinctively slower when they notice a police bike in the rear mirror to give way for you. It will translate differently to them. By so doing, you will lose potential friends.

Do not be deceived by seeing a new police bike and assume it is in good condition. Some will have a fascinating physical appearance, but the engine is old. It is not funny to see a police enforcement machine chasing after thieves on rough roads. It means the appearance will be encouraging but the engine and electrical system damaged.

Police officers spend the better part of their day outdoors idling. It is true to say that police officers use the machines for purposes other than the usual duties assigned. However, they must enforce the laws but take a different route while on duty. Ideally, police bikes are not designed for unlimited idling, so that the cooling system could be damaged.

Let’s take the example of Harleys which has an air-cooled system. It is not designed to be used frequently because it is air-cooled. Considering second-hand police motorbikes is not a good idea because you may end up buying a reject.

Take it simple and use common sense. For example, what will happen if an officer is engaged in a tough exchange of firearms? The officer will treat it as a guard, and the motorbike will end up being damaged. Considering a new bike will be better than opting for a used police bike in such a case. If your best option will be the second-hand police motorbike, then set aside some extra cash for maintenance.

Everyone desires to save on maintenance costs, and so the cops tend to opt for local garages to maintain their motorbikes. However, urban mechanics can predict upcoming mechanical issues and solve them in advance; thus, considering central police bikes is better.

The best models used by police are described in this article. Do not rush to get into any deal before knowing the best machines with long life. You will be lucky to get any of the below models but which is in good condition.

Harley Davidson FLH is best for police operations but only those designed for police purposes. Yamaha, Kawasaki Concourse, Kawasaki 1300, and Kawasaki 1400 are the best Kawasaki models. Honda is on the list with Honda ST1300 and Honda ST1400.

BMW and K series represent BMW in the police race. All police bikes come with an added feature different from civilian bikes. They have the letter “P” for police at the ends of the name to show it’s a police bike. An example is a BMW R1250 RT-P.

To sum up, examine the pros and cons of buying second-hand police motorbikes. If the pros outshine the cons, then go for the deal or otherwise drop it. But since we perceive things differently, do not be discouraged from buying your favorite used machine, and you will enjoy the ride without a doubt.

To be on the safe side, go for a parade or escort bikes other than the general duty one. They are maintained regularly and take on light responsibilities. Though police bikes are routinely upgraded, not all of the cop bikes get the same upgrade.