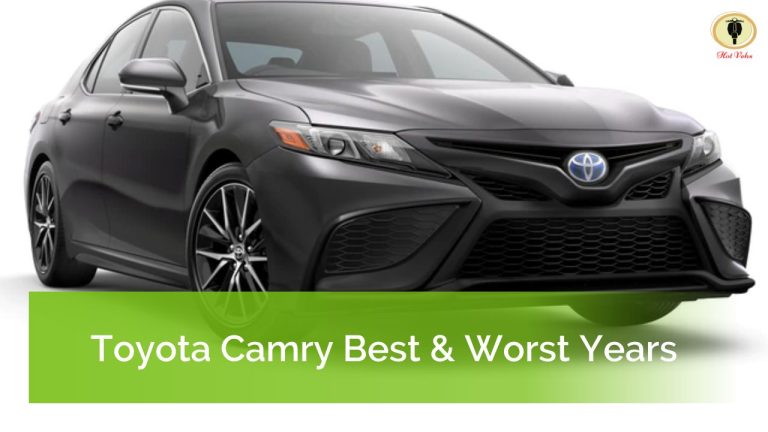 The Toyota Camry is arguably one of the safest and most reliable vehicles. Even older models have withstood the test of time with high-reliability scores and safety ratings. For example, the 2010 Camry is one of the most reliable, with a 5 out of 5 rating from the NHTSA for frontal and side crash tests.

Despite its excellent reputation, the Camry lineup has had its ups and downs. Most of the reported issues plaguing the model include transmission issues, air conditioning problems, brake failures, and excessive oil consumption.

This article will take you through the various Toyota Camry models to avoid and which ones to jump for when buying a used model. Keep in mind the frequent issues in these vehicles to pick the best buy.

The best years to look for when purchasing a used Camry are:

The Camry spans several generations that led the vehicle from having a narrow body in the early 1980s to the current wide body. The latest Camry is the eighth generation XV70 with 8-speed automatic transmission and two variants with a 2.5L inline-four gas engine and a 3.5L V6 gas engine. This is the most reliable Toyota Camry, but the story has not always been such.

2007 model was part of the vehicle’s sixth generation. It has the most complaints on Car Complaints, including engine problems and brake issues. Despite this, the 2009 model is regarded as the worst year by many severities of its issues with lower mileage. Here are the years to avoid when getting a Toyota Camry:

According to Car Complaints, the 2007 Camry is the most complained about. Moreover, MotorBiscuit refers to it as universally understood as one of the worst models to buy. With about one thousand NHTSA complaints about its engines, the 2007 Camry is a vehicle you would like to avoid at all costs.

Most issues reported about the 2007 model occur under 100,000 miles and usually have something to do with the engine. The most-reported engine problem is excessive oil consumption, leading to engine failure. Therefore, you will need to check the oil level frequently and may need to top off several hundred miles.

NHTSA has filed over 300 speed-control module issues that have led to over 100 vehicle crashes. This issue has earned the model a rating of 10 in terms of its severity by Car Complaints. Needless to say, the problem is more than unsafe and makes the 2007 vehicle a road hazard.

Another major issue has to do with the faulty transmission. The transmission is said to start lagging when accelerating, which leads to heating up and eventual failure. According to RepairPal, the most reported issues with the 2007 model include the automatic transmission that hesitates when accelerating and failing EVAP purge control valves. Most drivers end up replacing the entire transmission, which is a costly repair.

2008 model has over one thousand complaints on NHTSA and a total of eight recalls. The four-door forward-wheel drive vehicle has two recalls regarding the accelerator pedal. A recall statement on Pedal Entrapment mentions a stuck open accelerator pedal that can lead to high vehicle speeds and make it difficult to decelerate or brake, a dangerous situation that can cause a crash.

There are over 200 NHTSA complaints regarding the engine. One of the most common issues is excessive oil consumption, which Toyota did not fix from its 2007 model. The issue is severe and typically occurs above 100,000 miles.

Some have reported fixing the issues by replacing the piston, rings, and bearings, but a few had to replace the engine. The repair cost is more than $2,000 on average, which implies you would do well to spend your money on a more reliable model.

The 2008 Camry also experienced similar 2007 vehicle speed control problems that would affect its acceleration and speed. Again, this is a serious issue that can lead to road accidents, injuries, or death.

Some of the minor problems with the 2008 model include the 100 plus NHTSA complaints regarding peeling, cracking, and oxidizing paint

Car Complaints rank the 2009 Camry as the worst model year due to severe engine problems. Over 400 NHTSA complaints on the same issue indicate that the 2009 Camry needs to be avoided at all costs.

Most drivers reported burning about one quart of engine oil for several hundred to 1000 miles, which is annoying and wastes money on engine oil. If you fail to keep the oil level, the problem may become severe enough to damage your engine. You can expect to spend more than $1,000 fixing the issues.

Other issues with the 2009 model include brake problems like brake squeaks, warped rotors, vibration & grinding noise when braking, and ABS & Traction control lights that keep turning on. Other annoying issues with the vehicle include peeling paint.

You won’t go wrong with any new models of the Camry. They come with better fuel economy, fewer complaints, improved technology, and better crash-test performances from agencies like the NHTSA. However, if you want a better value car, you can opt for 2010, 2012, 2016, and 2017 models as they are more reliable at lower prices.

J.D. Power rated the 2010 Camry and reliability at a solid 85 out of 100 and 76 out of 100 for its driving experience. The vehicle has better acceleration and smooth driving than its predecessors.

This Camry also has better fuel economy and does not have the many complaints other years had regarding excessive oil consumption. Toyota seemed to have dealt with the issues that plagued its 2007-2009 models.

2012 Camry has one of the least complaints on sites like NHTSA and Car Complaints. With an 86 out of 100 quality & reliability rating from J.D. Power, you cannot expect any significant issues that might cost you a lot of money to repair. Only two recalls have been put for this model, and they only deal with air conditioning problems that may affect the condenser.  There were also minor complaints about the audio system.

The 6-speed automatic transmission proved powerful enough to handle massive acceleration and power output. V6 and I-4 layout engines provide a smooth ride with impressive engine sounds, in case you like that. The high-quality upholstering material and fine stitching added some finesse to the interior even though not everybody liked it.

There are ten airbag standards in each of the 2012 Camry models, adding to its crash protection safety. You can also find the Blind Spot Monito on these models which helps improve the ride’s safety.

2017 model saw the addition of comfort technology. New features include the power moonroof that adds an open and airy feel to the vehicle. There is also the wireless charging mat that makes charging compatible devices convenient. The Entune App Suite was also added to allow the driver and passengers to access apps from the touchscreen display.

2019 to present, models have an above-average rating in terms of reliability and safety. They also come with improved safety technologies like the Lane Departure Alert controls, conventional cruise control, and the full-speed range dynamic radar cruise control. There is also vehicle stability control, traction control, and Smart Stop technologies.

What to check when buying a used Toyota Camry

This is the most prevalent issue with the Toyota Camry model, especially in the 2007 to 2009 vehicles. The issue is caused by excessive heat in the engine that burns the oil rapidly. It is an issue that can lead to engine component failures and result in issues that will take more than $1000 to fix.

Transmission issues for this vehicle include transmission lags and shifting problems. This is a severe issue that can lead to accidents and expensive repairs. In addition, issues like rough acceleration and deceleration are bad for the vehicle’s performance. Keep in mind that the common causes may include onboard computer failure and faulty vehicle speed control modules.

Air conditioning issues are more common in older Toyota Camry models. The first symptom, in most cases, was a musty smell that emanated from the air conditioning vents. The issue is most of the time resolved by just servicing the system. However, if the problem persists, mold may build up to affect the entire system and warrant part replacements.

Brake issues included brake lights that kept coming on and unresponsive brakes. This is a serious issue that can often lead to accidents due to delayed braking and terrible driving conditions. Check if the Camry’s rotors are warped or if the brake booster and ABS are working normally. If this is not the case, then you should avoid the vehicle.