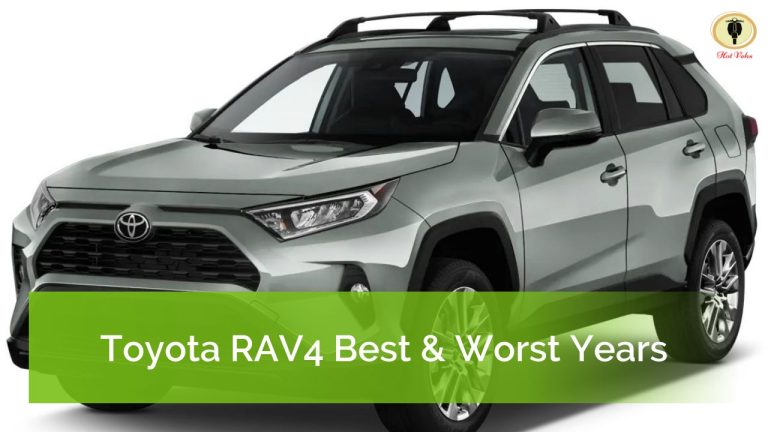 They are a popular choice since they offer a sweet spot in price and fuel economy for those who want SUVs but less of their huddles. Toyota RAV4 also includes several trims tailored for various consumers, be it budget-friendly, luxury, family-oriented, or off-road.

But not all years of the RAV4 are created equal. Here we’ll take a look at the best years to buy, and the worst years you might want to avoid altogether.

Keep in mind that these are the Toyota RAV4 years you should avoid when buying a Toyota RAV4:

Below are the best years of the Toyota RAV4:

RAV4 means Recreational Active Vehicle that has a 4-wheel-drive. Toyota decided to enter the market with this competitive crossover SUV back in 1994. It is considered the first compact crossover SUV globally, which curved a unique niche for the multibillion-dollar company.

The Toyota RAV4 brought about the excellent fuel economy, ease of maneuverability of a compact vehicle, and all the good specs SUVs are known for, such as huge cargo room. However, like all other vehicles, the Toyota RAV4 did come with its issue. Here are years to avoid:

2001 models have over 400 complaints about the transmission on NHTSA  and Car Complaints. Customers complained that the transmission would sometimes fail to shift into a higher gear. There were also issues with how the ECM controlled the transmission, but the most common problems were shifting issues.

The main issues with the 2002 and 2003 RAV4  transmission include gear slippage, jerking, or hesitation when changing gears and an Engine Control Module that allegedly makes the transmission bad. Unfortunately, these issues are not resolved by simple repairs but only by replacing the entire transmission.

You can resolve the ECM problem by just reprogramming the module, a process that can cost you about $900 – $1200. On the other hand, replacing the entire transmission can cost between $2000 and $3000.

Engine problems are other major issues plaguing this model and most RAV4s from 2001 to 2004. The vehicles experienced engine control module failures that affected other components, oil sludges, engine seizing up, and engine stalls/cut off while driving.

2006 to 2008, Toyota RAV4 received over 334 NHTSA complaints regarding engine problems. The 2.4-liter, four-cylinder engine, albeit powerful and economical, proved to be a downer in engine oil consumption. People have to check the oil level regularly and top it off every a few hundred miles, or else the engine will run dry and sustain severe damage.

Excessive engine oil consumption was not the only engine problem. Several owners reported oxygen sensor failures. In all the cases, the oxygen sensor failed abruptly way before its time, in some cases as early as 40,000 miles.

The model also had suspension issues that affected the drivability of the vehicle. A safety recall was made on the rear tie rods that control the toe of the wheels. Some vehicles experienced wheel misalignment that made for a rough ride and hard maneuverability.

NHTSA has only filed two recalls. One is for Driver side Frontal Air Bag May Rupture, leading to metal fragments striking passengers and drivers. The other is for Frontal Air Bag Inflators May Explode, where the same tragic catastrophe may occur.

After years of experiencing engine problems, you would think Toyota would have gotten rid of engine problems, but you would be wrong. 2013 RAV4 had severe engine issues that included sudden and unintentional acceleration and the engine shutting off abruptly. In addition, other customers reported excessive heat from the engine bay that led to fires and smoke in some vehicles.

Owners also complained about weird noises and vibrations at low speeds that would cause the vehicle to shake. The vehicle speed control caused a lot of problems, according to NHTSA. One owner reported that his vehicle suddenly accelerated when he was driving at about 2 miles per hour and slowed down to the park. The problem happened again when the owner drove the vehicle at about 60 miles per hour.

Despite the complaints on NHTSA, the company gave the vehicle an overall reliability score of 5/5. A good number of the problems did not affect a lot of customers. However, the NHTSA owner satisfaction went down to 2/5 owing to poor comfort and low-quality interior design.

Surprisingly, the recent 2019 Toyota RAV4 has the lowest reliability score of the RAV4 lineup in the past 20 years. Of course, you wouldn’t expect as many complaints from a newer generation, but 2019 set the record of having a 2/5 reliability score from Consumer Reports.

The primary issue afflicting the 2019 model is the faulty transmission system. Issues pertaining to the system include gear slippage and sudden gear changes. In addition, the drivetrain is inconsistent and unreliable as it would hesitate but also lurch at low speeds. This is an issue that would start as early as 3,350 miles.

Fuel system issues were also prevalent and led to an uneconomical ride. Some of the problems pointed to leaks, and others pointed to a faulty fuel pump system that inevitably started from 2,500 to 4,000 miles.

These are the best years if you are looking to buy a used Toyota RAV4:

There was also an introduction of an all-new 178 horsepower engine with a 2.5-liter capacity and an Inline-four layout. In addition, several features were added like a camera, smart keyless entry, GPS navigation, and the beloved push-button starter. 2009 model also came in a more modern style with a front bumper, reconfigured tail lights, redesigned grille, and a new fog light trim.

The transmission problems that used to affect the RAV4 group in the past seem to have died down with the 2009 to 2018 generation. The only issues you may encounter with the 2009 model may be a few cases of high oil consumption and issues with the vehicle speed control module.

2016 is hailed as the golden year of the Toyota RAV4. The 2016 model provides the best market value for someone looking to get all the modern crossover SUV features at an affordable price. It scored 86/100 in reliability and quality from J.D. Power.

RepairPal rated its reliability at 4/5 due to its very few complaints and how well it performs. It is also important to note that there are the years that the first generation comes with a Toyota RAV4 hybrid.

RAV4 earned IIHS Top Safety Pick in 2018 with this model. Moreover, Consumer Reports gave the vehicle a 5 out of 5 on their reliability score. J.D. Power ranked the vehicle at a score of 88/100 in terms of quality and reliability while also ranking it the best compact SUV of 2018.

Transmission problems, engine issues, steering, and breaking malfunctions are a thing of the past for this model. The luggage space is huge, and Toyota tweaked the suspension and steering wheel to make the vehicle maneuver more swiftly.

What to check when buying a used Toyota RAV4

You must get a licensed professional to help you purchase a used Toyota RAV4 if you are not as knowledgeable. This will save you a lot of time and money as you can quickly know if the vehicle was well maintained and what faults the model has had in the past. Moreover, sellers find ways to hide the faults that only experienced professionals may be able to identify.

Here are the factors you need to consider before you purchase a used Toyota RAV4:

Models like 2002-2008, 2013, and 2019 Toyota RAV4s are known to have severe transmission issues. Most problems are not easily fixed by simple repairs and may warrant a complete transmission replacement. Unfortunately, this is an expensive repair that can cost you thousands of dollars.

Steering problems are hazardous and can easily lead to road accidents. The 2007 Toyota RAV4 is the most afflicted of all the models. The main symptoms include clunking noises and vibrations when turning the steering wheel.

Condition of the engine

Engine problems are also very common with this model. The issue ranges from excessive oil consumption to oxygen sensor failures and Vehicle Speed Control module malfunction. Engine problems are significant issues that can lead to expensive repairs, accidents, and even explosions.