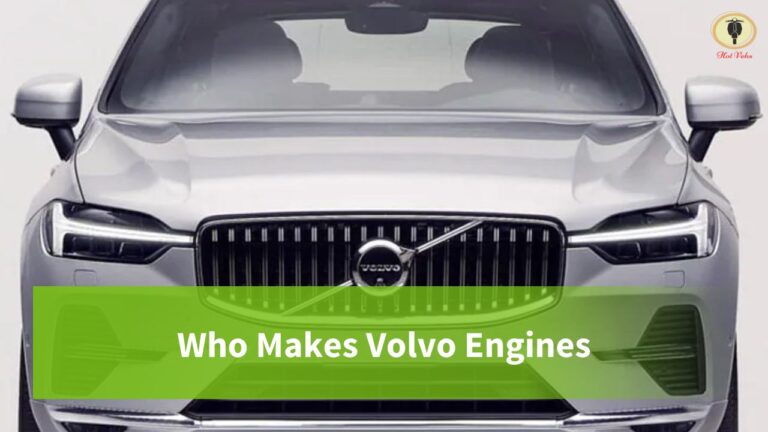 Volvo makes their own Volvo engines. Volvo has been developing and producing the new units in-house for the past two years. The engines will be built at Volvo’s Skovde engine plant, which has a capacity of 2,000 units per week.

Who owns the Volvo brand?

Volvo is owned by the Zhejiang Geely Holding Group, which purchased the company in 2010. Their goal was to revive Volvo’s losing market share and position the company for future growth.

Volvo used to be a part of Ford Motor Company, but now they are owned by the Geely Holding Group.

The Volvo Car Corporation has its headquarters in Gothenburg, Sweden.

Are Volvo Engines Any Good?

Volvo is an average car when it comes to reliability. In 2019, Volvo was given a score of 127 by the Reliability Index study. Volvo was ranked 23rd out of 40 car brands regarding reliability. However, l efficiency and performance, Volvo did a little better.

There are at least four different Volvo Engines. Here are these engines:

The Volvo B21 is a straight-four engine initially used in the Volvo 200 series and replaced the B20. The B21 and its derivatives are red block engines for its red paint on the block.

The B30 is an inline-six engine used by Volvo in cars starting in 1968. It was mainly used in the Volvo 164 sedan from 1969 to 1975. The engine was also used in other applications such as military vehicles, boats, and machines.

The Volvo Modular Engine was a series of car engines made by Volvo Cars in Sköve, Sweden, from 1990 until 2016.

A transverse engine is one in which the engine’s crankshaft axis is perpendicular to the vehicle’s direction of travel. This engine mounting style is used by many contemporary front-wheel-drive cars.

How does Volvo Engine Warranty work?

Is Volvo more reliable than Mercedes?

Volvos have a long reputation for being safe cars. However, they are not any safer than other luxury cars. I would argue that Mercedes is the safest car because it invented many safety features we have today, like crumple zones, airbags, and ABS braking.

The engine is what makes your car move. If your car has engine problems, you need to take it to a mechanic as soon as possible. Many things can go wrong with the engine, like not taking care of it or driving it a lot.

It would be best if you always kept up with the factory-scheduled services for your engine. This will help it stay healthy for a long time. If you notice any of these common signs of engine failure, call a local auto repair shop right away to avoid more damage.

If you hear a knocking noise coming from your engine, it might mean that there is a problem with the engine bearings. This happens when they don’t get enough lubricant and start to seize. It’s also possible that this will occur because of the high amount of wear on the engine over time. The bearings help the parts of the engine move, so if this issue isn’t fixed, it could lead to a rebuild of the lower half of the engine.

If your car is having a lot of trouble getting up to speed, has a rough engine idle, or is difficult to start, there might be a severe problem with the engine’s internal components. Several things could cause these problems, such as malfunctioning sensors or dirty filters.

But before you rule out mechanical engine trouble, take the car to a local auto shop for a test drive and computer analysis to find out what the problem is.

High fuel consumption can signify that the engine is not running correctly. It could mean serious engine problems, like clogged or worn fuel injectors or faulty sensors. Your car will also use more gas than usual if the spark plugs aren’t firing at all times.

4. Your engine stutters or stalls

If your engine keeps stalling stuttering, the inner of the engine might be having issues because it is not strong enough to keep going.

The first time this happens, the issues could result from a temporary problem like a low battery or dirty fuel injectors. However, if you notice that it’s frequently happening, it could mean that your engine is about to fail, and you need to have it rebuilt or replaced right away.

Even if you have a low amount of miles on your car, this could be a severe problem with the engine’s compression system.

A telltale indication of engine failure is the material that comes out of your vehicle’s tailpipe. If you see colorful smoke coming from your car, there’s a good chance there’s some problem with the engine.

Yes. The color of the smoke is typically used to identify the most common issues. Knowing these colors can save time on your diagnostic efforts and get your car repaired faster.

The color of the exhaust smoke is telling you something. There’s a good chance there’s an oil leak, and your engine is burning oil. You may need a professional evaluation. The leak could be caused by different things, like a leaking valve seal, damaged piston rings, or worn cylinder walls.

When the car burns too much fuel, black exhaust smoke may appear, such as a clogged air filter, faulty fuel injection system, a blocked manifold, or other problems might be blamed. Consumer Reports claims that although a clogged air filter won’t damage your gas mileage, you will pay for it with decreased performance. Check out your vehicle’s performance by having it inspected by a professional to discover why it’s burning more fuel than usual.

If your automobile’s exhaust continuously produces a thick white/gray plume of smoke from the tailpipe, your head gasket may be leaking. “As a result,” Paul Brand, an auto journalist, explains, “the coolant would be heated in the combustion chambers and blown out the exhaust as the engine started.” A cooling system leak in the summertime might rapidly lead to an overheated motor leaving you stranded on the side of the road.

Exhaust smoke pouring from the tailpipe might indicate a cracked block or cylinder head, both of which are highly detrimental and must be addressed as soon as possible.

Here are some questions and answers to help you more about the Volvo Engines:

Where is Volvo based?

Volvo Cars is a multinational firm with factories in China, Sweden, and the United States.

When was Volvo founded?

On April 14, 1927, the company was founded in Hisingen, Gothenburg, Sweden.

What is Volvo famous for?

Volvo is a company that makes sensible, dependable, and safe cars.

Volvo engines are famous for their high quality and reliability. The company offers a warranty for 24 months or 3,000 hours on their industrial standby diesel engines.

This warranty covers problems with the engine that happen during this period.