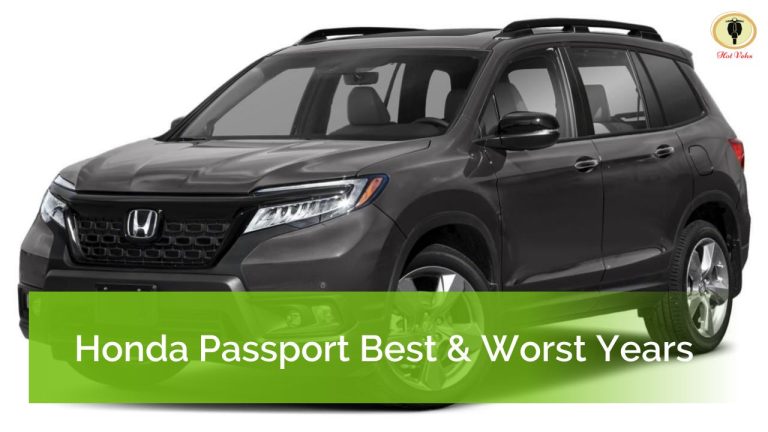 2021 Honda Passport has a reliability rating of 5 out of 5 from Consumer Reports. This is a step up from the 4 out of 5 of the 2020 Honda Passport. The Honda model is one of the most reliable vehicles on the market today but that never used to be the case.

Earlier models of the Honda Passport were plagued with serious issues that led to several recalls and expensive repairs. One of these problems is rusting frames, a problem that was so severe that no amount of welding or strengthening would fix it.

When purchasing a used Honda Passport, make sure to avoid worst model years 1998-2001:

The Honda team came back with a great model in 2019 despite the many issues affecting the early generations. Best years for the Honda Passport include:

Honda began the production of the model through a joint venture with Isuzu. The first Honda Passport was a badge-engineered version of Isuzu’s Rodeo lineup that helped Honda get into the SUV market.

They featured both 5-speed manual and later 4-speed automatic transmissions, with 120 hp semi-powerful engines. Unfortunately, despite their specifications, these early Honda Passport models didn’t live up to the Honda name.

Here are the years to avoid:

Several recalls were made on the 1998 model, including one for the rear suspension lower link brackets. This issue is major as it involves excessive corrosion that may result in the suspension’s lower link getting detached from the frame. It is a severe problem that can lead to crashes by affecting vehicle handling. NHTSA lists 49 complaints pertaining to the suspension issue.

72 NHTSA complaints were also filed for brake problems, which involved brake failures, especially on muddy, bumpy, and wet surfaces. In addition, customers reported failures of the ABS that almost led to accidents.

The earliest recall for the 1998 model was an issue with the engine wire harness. According to Honda, Ïf a terminal is fractured, the powertrain control module can receive an erroneous signal indicating a high vehicle speed, causing the PCM to cut the fuel, causing a ‘no-start’ condition, or a possible engine stall.

That is not all, a year 2000 recall of the model explained a severe issue with the rear axle. As per the problem description, the bolt on the axle could detach fully, leading to separation and increased risk of the vehicle losing control.

A massive recall was made for the 1999 Honda Passport due to the same serious frame rusting issue of the 1998 model. In that year, dangerous rusting occurred near the rear lower control arms. The 2010 National Highway Traffic Safety Administration (NHTSA) recall saw that 150,000 Honda Passports were recalled.

You would think two consecutive years of the frame rusting issues would lead Honda to make significant changes, but you would be wrong. Instead, the problem persisted with the 2000 model, which also experienced many transmission issues similar to its predecessor.

As per the Consumer Reports, the 2000 Honda Passport has mediocre brakes, and the vehicle’s handling is clumsy. You can expect a lot of hard slams when you take on a sharp bump, and the ride is rarely smooth, even on well-maintained roads.

NHTSA recalled the 2000 model in 2010 for suspension issues. The recall mentioned excessive corrosion on the suspension’s left or right link, which could detach. Needless to say, the vehicle handling was poor because of this, which makes the entire vehicle a hazard.

The NHTSA has 112 complaints about the vehicle. Complaints include severe issues like steering, suspension, fuel system, structure, engine, and power train failures.

The 2001 model got three recalls from the NHTSA. Complaints include 145 issues ranging from suspension faults to airbag malfunctions to structural failures. Structure failures and suspension faults are the most reported cases of all of these. The issues involve excessive corrosion on the rear suspension lower link brackets that affect handling.

A 2002 Honda/Air Bag Module recall states, “In the event of a crash, the airbag will not inflate properly or sufficiently, resulting in an increased risk of injury to the seat occupant.”

Another recall shows the opposite problem where the airbag inflator module explodes due to too much generant. It is important to note that metal and plastic debris get shot to injure the passengers if the explosion happens.

The NHTSA rates the vehicle four stars for overall front driver-side safety and the front passenger side. Five stars are given its side barrier test, but the rollover resistance test puts the 2001 Honda Passport at 3 stars.

Minor issues that were mostly reported talked about paint issues and electrical problems.

Honda Passport went out of the market for 17 years when the partnership between Honda and Isuzu ended in 2002. This decision was made in favor of making Honda’s successful Pilot lineup that has had an excellent track record.

2019 Honda Passport was the first vehicle in the third generation of the lineup. The two-row mid-size SUV utilizes a 9-speed automatic transmission that did not experience issues like the earlier generations. Its success was translated into the later models, making the third generation the best models to buy.

2019 model achieved a top 5-star overall vehicle score from the NHTSA. The vehicle comes with the beloved Honda Sensing technology that has played a big part in increasing the reliability and durability of Honda vehicles.

The advanced suite of safety and assistive technologies helps improve awareness of driving conditions and prevents collisions through various detections. There are no major issue reports for the 2019 model, and the minor ones include small electrical issues like the radio shutting off.

J.D Power gave the 2020 Honda Passport an overall 5-star rating and a four-star rating for its frontal barrier crash test. There are no major complaints about this model but one customer reported grumbling sounds when turning the steering wheel.

Edmunds praises 2020 for its comfortable seats, upscale cabin materials, and V6 engine that is exceptionally fuel-efficient and powerful. Moreover, the space is ample with over 41 cubic feet of storage. Car and Driver’s review of the vehicle states how the adaptive cruise control and automatic emergency brakes give it a huge safety advantage.

The 2021 and 2022 models haven’t had any notable complaints since they have been in the market for a short time. However, they continue to show outstanding reliability, comfort, and performance from their predecessors. 2021 model has a 4-star safety rating from NHTSA

What to Check when buying a used Honda Passport

Here are the factors to check when getting a sued Honda Passport:

Most recalls for the Honda Passport dealt with structural issues due to rust and rotting frames. Ensure to check for the vehicles with this condition before purchasing a used Honda Passport.

As a rule of thumb, it would be best to avoid first and second generations as these vehicles had massive recalls. The issues are mostly major and can lead to expensive repairs.

How many miles can a Honda Passport go?

Third-generation Honda Models from 2019 can last more than 200,000 miles with ease. Unfortunately, this cannot be said for first and second generations as they are more likely to experience failures from about 90,000 to 100,000 miles.

Does the Honda Passport have transmission issues?

The first and second generation of the Honda Passport is plagued with transmission issues. This includes rotting frames that lead to transmission failures and gear slippage.

How reliable is the Honda Passport?