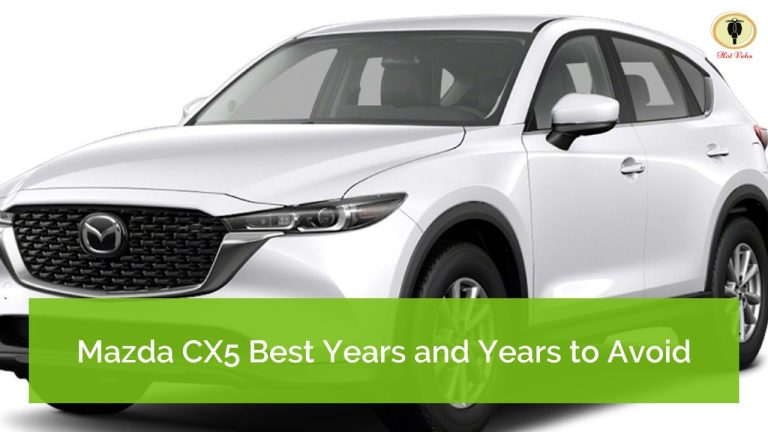 Mazda CX-5 has become a highly popular and best car model. The Japanese machine has seen progressive transformations since its debut in 2013. However, regarding the positive reviews received, the car has also been criticized based on the premium interior features, sporty styling alongside spirited handling.

In addition, Mazda CX-5 utilizes skyactiv technologies that depend primarily on lightweight and rigid platforms with a series of engines and numerous transmissions that reduces fuel consumption. Therefore, looking at various aspects like safety, fuel efficiency, reliability, and ease of finding spare parts can help determine the best and worst years of the Mazda CX-5 car model.

The following are the Mazda CX-5 Years to avoid.

2017- 2021 are the best years for the Mazda CX-5 car model. Most new models are more efficient, reliable, and effective than the older models.

Years to avoid: The older models coming from the first generation

This is the final year of the first generation, with many projections to figure out all shortcomings of the previous years. However, it became the worst year since it produced the worst models with varied problems.

The cause of daytime light failure was the defective light panels which needed repair on the flickering headlights. In addition, the brakes were generally squeaky because they could prematurely wear out with their working not being proper.

Numerous customers also had many complaints since the windshields could crack or break because of poor quality. Also, being the year with 5 recalls, the filler pipe for the fuel would rupture with rear lift gates falling after getting corroded.

With this model being in the early stages, avoiding mistakes in car development was tough entirely; hence, releasing car models with several problems. The problems were fewer than in the 2016 Mazda CX-5 models, with one less recall.

There were many electrical issues like the car not starting up, shutting down, and frequent electrical shutdowns. This model also suffered varied engine problems like losing acceleration, ignition coil failure, and not shutting off completely.

The quality of the interior was poor, making it not attractive. The seats were uncomfortable and were wearing up first, with its backup camera failing and USB devices having unrelenting problems.

2013 was the first year that the first model of Mazda CX-5 and individuals were excited to own the vehicle. However, the car came with many problems that were frustrating and disappointing.

Engine failure was a big issue. The engine hesitates when driving, prone to buckling and decelerating. The engine failed a lot, accelerating unintended, which is not good. In addition, the engine was very noisy, mainly when starting up, and produced an unpleasant whining sound.

The Best Years for Mazda CX-5

Mazda CX-5 manufacturing company set an undisputed reputation when it released outstanding models with little to no issues. With this respect, customers were happy and gave positive reviews because of the excellent driving and reliability of the car.

This is the best year that offered exceptional mix, reliability and driving that other models cannot match based on customer satisfaction and appreciation.

The model received numerous positive ratings making it the most trusted and reliable vehicle an individual can own. In addition, the model is adaptive to cruise control with excellent driving and steering, which many customers like.

The manufacturing company of the model car also put much effort into the setting and improving the turbo engine. This made the car move faster at a more incredible speed in a powerful way. The car cabin became appealing and quiet with minor noise disturbances and many upgrades. The exciting part of the car was the standard features like blind sport braking and automatic braking provided to customers.

This is the first model of the second generation of the Mazda CX-5. The popularity of this car model was extraordinary since many individuals were hoping it could solve the previous shortcomings experienced in other models.

The pretty and complete redesign made inside and outside the car was superb. The stylish design and restructure made this model gain much popularity. This model came in handy with four diverse trims with 6-speed automatic transmission and a 2.5L four-engine cylinder.

This model improvised the cabin to be quiet, thus ensuring smooth driving and flawless working throttle design. Additionally, the interior was made of the best quality materials to ease and improve the comfort of the previous models.

The Mazda CX-5 for 2020 offers an exciting, above-average driving experience from its impressive steering and subtle interior design. The car can rise to 250HP thanks to its 2.5L four-engine cylinder and AWD & FWD systems.

The car received many positive ratings, which made it rival well with other models in the SUV market. Notable changes about the 2020 model included creating additional features to scale up the previously designed models.

The year also delivered AWD and FWD systems with cylinder deactivation in the engine technology, thus making it exceptional. The smooth and excellent driving do not miss this model, making it soundly great.

A summary of the best year

Generally, 2017- 2021 are the best years to look for the Mazda CX-5 car models since improvisation meets customer needs and satisfaction.

2020 is the best year because of the new additional features introduced. The new features include automatic headlights, pedestrian detection, and adaptive cruise control. Furthermore, the reliability rating of the Mazda CX-5 is 4.0 out of 5.0,  thereby ranking number 22 out of 36 among all the compact cars.

Is the Used Mazda CX-5 reliable?

Purchasing a car needs a clear mindset with adequate information on its specifications. Therefore, the quality and reliability of a vehicle impact its safety.

On this note, Mazda CX-5 is an exceptional and reliable car with a reliability score of over 80% based on consumer reports. The car has received much praise and many positive ratings from customers who purchased the vehicle.

The Mazda CX-5 has more benefits that surpass the shortcomings, proved in many instances.

How long can the Mazda CX-5 last?

Mazda CX-5 is an outstanding and durable car with a long duration of service that is not less than 13years if driven with care appropriately. Therefore, Mazda CX- 5 can travel more than 200,000 miles at the lowest.

Safe driving and proper maintenance are critical aspects of increasing the vehicle’s lasting duration by 3-4 years, and the way you drive and handle your car matters a lot.

Is it costly to maintain a Mazda CX-5?

Mazda has an excellent reputation for reliability and being durable. Generally, Mazda CX-5 provides needed repairs at the right time at a lower cost, thus outshining other counterparts. In this respect, the maintenance and expenses of the Mazda CX-5 are around $581 based on repair pal reports annually.

Therefore, maintaining the Mazda CX-5 is relatively cheap when compared to other brands of vehicles and models.

Is the Mazda CX-5 good in Snow?

Mazda CX-5 can easily navigate snowy roads and their environments with its AWD system. The AWD system is essential in creating activating traction that helps prevent tire slipping.

Moreover, the model car comes in handy with 19-inch seasoned cars that provide tremendous confidence when navigating over Snow. The tire design is excellent in preventing the crashing and slipping of the vehicle.

Mazda has manufactured many car models and brands for a long time. Most of the cars it produces range from those for average individuals and racing professionals. The company is highly committed to improving quality as it strives to manufacture durable vehicles.

Even though the car models are not limited to some problems, Mazda has constantly improvised its manufacturing processes to produce outstanding models that customers highly appreciate.