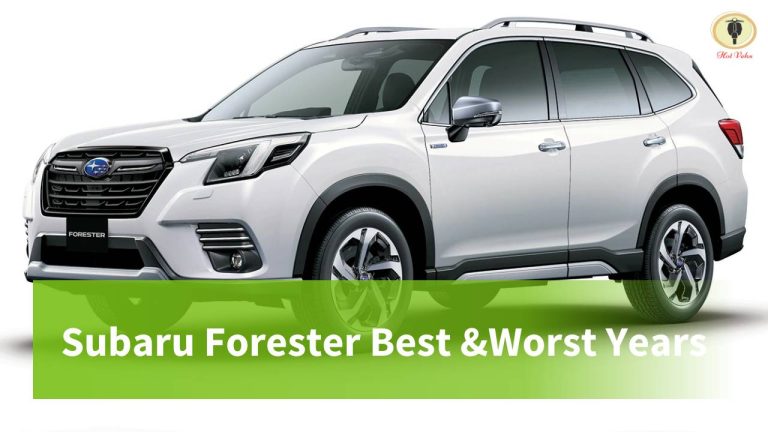 Subaru Forester is a very popular and safe car model. It has been manufactured since 1998 and is still in production. However, many Subaru Forester model years are unreliable and may have some severe problems. If you are thinking about buying a used Subaru Forester, it is best to avoid these years.

Here are the years of the Subaru Forester to avoid:

2018-2021 are the best years for the Subaru Forester. These newer models are much more reliable and don’t have as many problems as older models.

If you consider buying a used Subaru Forester, avoid all the first-generation models (1998-2002). These models have many common problems, including head gaskets blowing, vehicles not shifting into drive, and rear-wheel bearings failing.

Common problems on the first-generation Forester

Head gasket leaking is the most common problem on the first-generation Forester. It can cause the engine to overheat and fail. The vehicle may also not shift into drive. And the rear-wheel bearings can fail, causing the wheels to come off while driving.

Subaru used the DOHC EJ25D 2.5 liter boxer engine in the 1998 Forester, prone to internal head gasket leaks. This engine is also used in Subaru models like the Outback and Legacy from 1996 to 1999.

Forester model years 1999-2002 are equipped with 2.5L SOHC EJ251 engines. These engines are known for external head gasket leaks between the cylinder heads and engine block resulting in coolant and/or oil leaking out between the head and block.

The head gasket leaking problem was still not fixed in this generation of Foresters. So, avoid the 2003-2010 Forester as well. Head gasket blowing is an expensive repair that can ruin your engine.

However, the Forester model years 2011-2014 are known for excessive engine oil consumption problems, which could be as high as a quart of oil every 500-1000 miles driven. You have to check the oil level frequently and top it off as needed, or else the engine will suffer severe damage.

Although Subaru didn’t officially recall these vehicles, there was a class-action lawsuit against the company.

Subaru settled the lawsuit, agreeing to replace the affected vehicles’ engines with a redesigned boxer engine, and agreed to extend its 5-year, 60,000-mile warranty for the alleged defect to an 8-year, 100,000-mile warranty. So, they will charge you for repairs if a 2011 Forester’s excessive engine oil consumption problem is not fixed by 2019.

NHTSA 2011 Forester’s overall safety rating is only 4 stars out of 5, which is another reason to avoid this year and get other safer Forester models.

Common problems on the 2011 Forester

The catalytic converter is a crucial part of the emission control system. It helps to reduce pollution from the vehicle’s exhaust. However, the catalytic converters on the 2011 Forester can fail at higher mileage, causing the “check engine” light to come on with the code P0420 or P0421. When out of warranty, this repair can be costly.

Excessive oil consumption was still a problem on the 2014 Forester. In fact, it’s the most common problem reported by owners this year.

The other common problem with the 2014 Forester is related to the vehicle’s suspension. The coil springs can fail on average at 57K miles, causing a clunking noise when driving over bumps.

While this problem is not as severe as the oil consumption issue, it can still be costly to fix.

Front or rear wheel bearing noise or even failure is also a common problem on the 2014 Forester.

Common problems on the 2014 Forester

Excessive oil consumption is still a common problem on the 2015 Forester. If you own a 2015 Forester, be sure to check the oil level regularly. You may need to add several quarts between oil changes.

Many people complain the 2015 Forester may accelerate unexpectedly. The car just suddenly accelerated on its own. This is a serious safety issue that could lead to an accident.

Engine stall while driving is not uncommon for the 2015 Forester. The car’s speed dropped suddenly while on the road, and it could not accelerate.

Bluetooth connectivity issue is a widespread problem on the 2015 Forester. Although this is not a safety issue, it’s still very annoying.

Common problems on the 2015 Forester

Many Forester owners complain that windshields cracked easily on this generation. Maybe a tiny pebble hit the windshield while driving, and then a crack appears.

This problem is especially common in the 2018-2021 Forester, but it can also happen in other years. Windshield insurance is a must that can help cover the cost of replacement, but it’s still a hassle.

Subaru has fixed the major engine problems that plagued the earlier Foresters, including the notorious head gasket leaking and excessive oil consumption.

The only problem that seems to be plaguing the 2018 Foresters is the weak windshield (NHTSA 14 complaints), which is considered a minor issue.

Consumer Reports rated the 2019 Forester at 4 out of 5 on the “Overall Reliability” scale. Owners have reported no major engine or transmission problems.

The fifth-generation 2019 Forester has a new design and is significantly updated from the previous generation. It’s now powered by a 2.5-liter four-cylinder boxer engine with 182 horsepower. The interior is more spacious, and the car comes standard with many driver assists, such as adaptive cruise control and lane departure warning.

However, the 2019 Forester is not without its problems. Many owners complain about the windshield chips easily. And a few complaints about the steering is way too sensitive.

If you’re looking for a reliable and safe Forester, the 2019 model is a great choice.

2020 Forester win a 5 of 5 rating on Consumer Reports’ “Overall Reliability” scale. Additionally, no recall has been issued for the 2020 Forester as of the published article.

Like the previous year, the windshield chips easily on the 2020 Forester. And some people find the steering sensitive. But overall, it’s still a great car.

Subaru has improved the Forester for the fifth generation, and the 2020 model is a great choice if you’re looking for a reliable and safe car.

The fifth-generation Forester has been very reliable so far, and the 2021 model is an excellent choice if you’re looking for a safe and reliable car.

2021 Forester is another 5 out of 5 rating on Consumer Reports’ “Overall Reliability” scale. No major problems have been reported by owners. There have been no recalls for the 2021 Forester.

The common complaints about the 2021 Forester are the windshield chips easily, and the steering is too sensitive. But overall, it’s still a great car.

If you’re looking for a Subaru Forester, the best years to buy are 2019, 2020, or 2021. These models have been very reliable and have received high marks from Consumer Reports. However, these Foresters have had some problems with windshield chips. But overall, these are minor issues and shouldn’t deter you from buying a Forester.

What to check when buying a used Forester?

When buying a used Forester, it’s important to check for any recalls that may have been issued. You can visit the National Highway Traffic Safety Administration’s website to check if the car you’re interested in has any open recalls.

You should get a car history report to see if the Forester has been in any accidents or had any other problems. All of this information will help you decide whether or not to buy a particular Forester.

As mentioned above, head gasket leaking is a common problem with the earlier Subaru Forester.

The head gasket seals the engine block to the cylinder head. A blown head gasket can cause coolant and oil to mix, leading to engine damage.

Wheel bearings help the wheels rotate smoothly. If they become worn, they can cause the wheels to wobble or make noise. The earlier Foresters are known to have problems with the front or rear wheel bearings.

Rust can be an issue with any used vehicle. Some common rust spots to check for:

Oil leaking is a common problem. It can be caused by many things, such as a bad gasket or seal, worn engine parts, or an oil cooler that is not functioning correctly.

Unfortunately, the earlier Subaru Foresters are not very reliable. Consumer Reports rates most of the Forester average or below average in terms of overall reliability.

However, Subaru has fixed the major engine problems that plagued the earlier Foresters, including the notorious head gasket leaking and excessive oil consumption.

Consumer Reports rates 2017 Foresters 5/5 on major and minor engine reliability. 5 out of 5 on major transmission reliability. And it was only 1 recall on airbags.

We consider 2017 Foresters to be a neutral year.

What Are Common Problems With Subaru Forester?

Some common problems with Subaru Forester are: