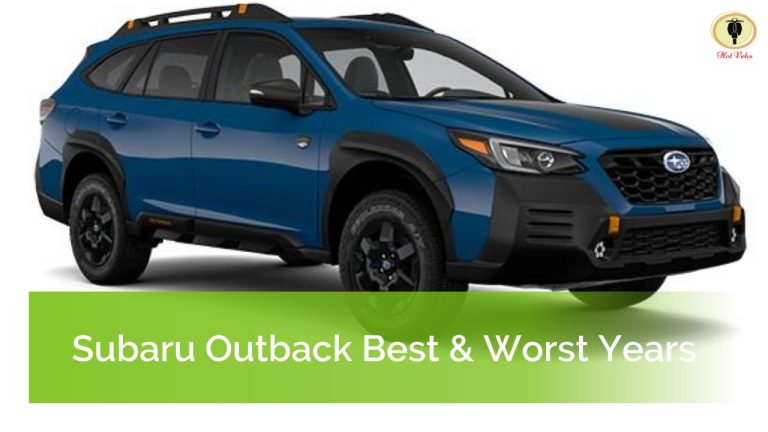 The Subaru Outback is seen as an Off-road station wagon, which has the off-road capabilities of an average size SUV specification. The vehicle has a large space and various storage areas. It is a perfect family SUV and comes with many safety features.

Not all the outback models are reliable. Some are more reliable than others, and some models are problematic.

The production of the Subaru Outback brand started in 1997, and there are 7 generations of the auto brand. The vehicle is still being produced and sold well in the market today.

Here are some of the years of the Subaru outback to avoid:

The best years for the Subaru Outback are the 2020 and 2021 models. They have fewer complaints and are more reliable. So if you are looking to buy a used Subaru Outback, you should go for these models.

If you are thinking of getting a pre-owned Subaru Outback, you should avoid the 1997 model. This vehicle’s most common engine-related issue is a triggered engine light. Other problems also include gasket failure, which eventually leads to overheating. Another problem is the rattling noise that nearly drives the owners of this vehicle crazy and the clutch issue.

This model of Subaru outback received a total number of 121 complaints. These complaints were mainly engine-related issues.

The model of the Subaru Outback produced between the years 2010 to 2011 experienced similar problems of hesitation and stalling. The hesitation or stalling of the vehicle happens mainly when the driver tries to accelerate.

There were other common problems like the transmission issues, which are also a cause of the hesitation and acceleration problems. Also, the models experienced stalling and shuddering issues.

The most predominant issue owners of the 2013 Subaru Outback is excessive oil consumption. The cause of this was a result of faulty parts of the engine. A faulty piston ring will allow oil to drain into the combustion chamber and burn.

The 2014 model had a significant problem with hesitation when accelerating, which caused a lot of complaints. In addition, the vehicle also had some issues related to the engine system.

Transmission failure is also a major problem of this model. Considering the numerous complaints and the cost of repairs, the 2013 and 2014 Outbacks were the worst model years.

The Subaru also faces the problem of the engine not starting. It could be caused by a failed starter, alternator problem issues, or a damaged battery. There are over 100 NHTSA complaints of unusual battery drains overnight without any reason.

The 2015 Subaru Outback is one of the poorest performing Subaru outback models. It comes with major issues and has about 698 complaints from vehicle users, according to carcomplaints.com. Some of its common problems are listed here.

The common problems are mainly windshield and battery issues. If you want to buy a Subaru Outback, you should avoid this model year.

Another problem is the windshield cracks that will appear from nowhere. These problems were frustrating and led to a lot of complaints.

Best Year of the Subaru Outback

The models produced between 2005 and 2009 had several improvements. Subaru fixed the notorious blown head gasket problem in 2005.

For many, the Subaru Outback produced is the best and most reliable during these years. Subaru introduced the Turbocharger XT model, producing 250 horsepower at 6,000 pm. There was also an upgrade in the design of the vehicles.

These models did not receive many complaints compared to previous models of the Subaru Outback.

The 2020 and 2021 Subaru Outcast is an improved vehicle that solves all the issues of previous models. They are the 7th generation Subaru Outback vehicles. What makes this vehicle special is its safety features.

The model has a good rating by its users but a few complaints with the windshield, which gets cracked easily. There have not been any major complaints about the model years.

What to Check when buying a used Outback?

Before getting a used Outback, there are some factors you need to watch out for. Some of these factors will be mentioned below.

The head gasket is an important and expensive part to fix. It is the seal between the engine block and cylinder head. A blown head gasket will cause loss of cylinder compression, engine oil leaks, coolant leaks, and engine overheating.

You should check if there are any blown head gasket symptoms.

The Oil leaks are an essential aspect you should watch out for before buying a used Subaru Outback. Oil leaks are predominant among Subaru vehicles and can cause a lot of damage to the engine system. Make sure to check the valve cover gasket.

What year is the safest Subaru Outback?

The 2021 Subaru Outback is considered the safest model if you are looking for a used vehicle. It comes with several safety features that ensure the driver and the passengers’ safety, including brake assists, electronic stability control, traction control, etc.

What year did Subaru have head gasket problems?

The problem was that Subaru was using a single-layer gasket with a graphite coating instead of the usual multi-layer steel (MLS) gasket. Unfortunately, the single-layer gaskets coating was made of composites materials that couldn’t handle the high temperatures and pressures inside the engine at around 100k miles. As a result, they failed and caused head gasket leaking problems.

The Subaru Outback is a safe and reliable vehicle with many features to give you and your family a great driving experience. The vehicle is a mini SUV  and comes with a lot of space in the passengers and Cargo area.